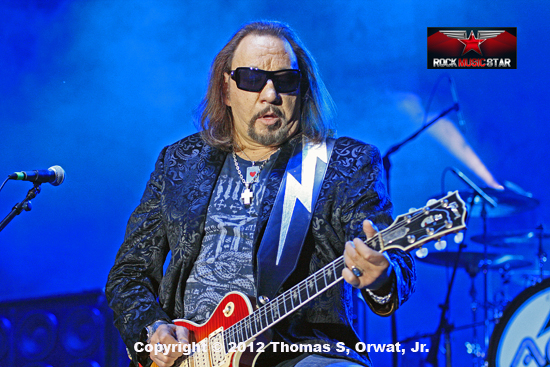 Erie, PA – The last time I had seen Ace Frehley in concert was last year, at the Erie County Fair. This year, the closest concert that was booked to the WNY area was in Erie, PA. Is there something eerie about ‘Erie?’ As Ace would say, “I dunno?” Regardless of whether or not the Spaceman’s celestial undertones influenced his tour routing, seeing Ace Frehley in concert is always a good thing. A great thing is seeing Ace headline the Celebrate Erie festival, playing in front of an estimated crowd of 40,000 people, closing out the 3rd night of the 4 day festival. While Ace has often been described (and even self-described) as being ‘lazy’ at times, he’s worked long and hard to keep his name in the public eye, and after fighting the critics, the nay sayers, and even his former band members for almost 40 years, Ace truly deserves all of the kudos and accolades that come his way.

Rarely do I include personal information into my articles, but I feel it would be remiss if I did not include the full experience I witnessed while attending this Ace Frehley show. In addition to myself and RockMusicStar webmaster Thomas S. Orwat Jr, also making the trip to Erie was my significant other (and RMS contributor) Diana MacDonald, and our 4 year old grandson, Matthew Ryan MacDonald Jr. Matt was adamant about coming with us to the Celebrate Erie Festival and to “see the Spaceman.” Making the road trip was also a pilgrimage of sorts for Matt, as part of his family has roots in Erie, PA. Taking the 90 West straight down to exit 27 (Ace’s lucky number of course), we quickly pulled into downtown Erie and witnessed the massive Celebrate Erie event, which was still going strong after being held all day (and the 2 days prior). While we missed out on the Chalk Walk and the puppet show and the other musical acts from earlier in the day, we were met with friendly faces and smiles from all of the attendees that we encountered, impatiently waiting for Ace to take the stage.

Ace and his new solo band lineup (featuring newcomer Matt Starr on drums, replacing longtime Frehley skin beater Scott Coogan) hit the stage close to the 9:30 pm scheduled starting time. And they were LOUD!! After taking ‘little Matt’ to see Foreigner and Ted Nugent previously, Ace was much louder by comparison, which was noticeable even with heavy duty earplugs. Considering the people in attendence for a show like this, Ace played a very KISS-heavy set list. However, Ace didn’t become complacent and just deliver a ‘greatest hits’ type set, as he pulled out the obscure rarities like “Flaming Youth,” “Strange Ways” and “Lover Her All I Can.” 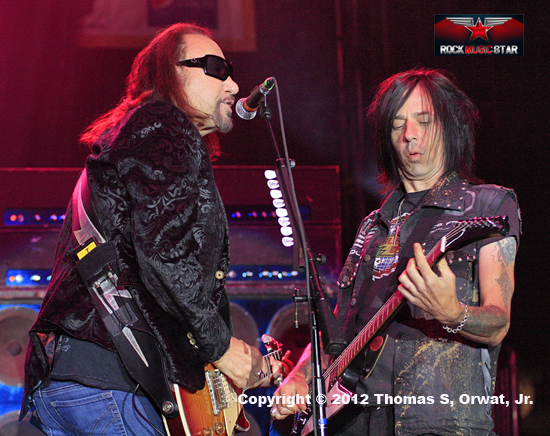 While Ace was onstage putting on a great performance, my grandson was in the VIP area putting on a show of his own. Rocking out harder than fans 10 times his age, he was playing air drums and air guitar, doing all of the signature KISS moves and throwing in some of his own. People were so enamored by his little ‘show,’ countless folks were asking if they could take his picture and/or film video of his act.

Ace’s 90 minute set went off almost without a hitch, except when guitarist Todd Youth’s microphone wasn’t on when he started singing the first verse of “Flaming Youth.” New drummer Starr, was almost a bald clone of his predecessor Coogan, as he played in a similar plodding fashion and sang lead vocals on the songs Coogan used to (ie: “Love Gun”) and sounds almost identical to him. Long time bassist Anthony Esposito did this thing and held down the groove as always and did an outstanding job when he sang his assigned song, “Strange Ways.” During “New York Groove,” Erie, PA major Joseph E. Sinnot joined Ace on stage to sing the song with the band, and during the last chorus, they changed the lyrics and sang “Back In the Erie Groove.” Closing out the show with “Cold Gin,” the unusually verbose Ace borrowed a line from Paul Stanley, noting that while the song is about alcohol, he asked the crowd to not drink and drive.

After the show, we all had the opportunity to attend a ‘VIP only’ Meet and Greet, and got to spend a couple minutes with Ace. Ace was super cool to my grandson and picked him up on his lap so Ace could hear Matt talking to him. And while Ace was not supposed to sign any autographs (except for the paying ‘Meet and Greet’ groups who met Ace before the show), Ace signed Matt’s KISS ‘Reunion Tour’ tour program. While it was short, I could see how much the experience meant to my grandson. Prior to this show, my fondest memories of seeing Ace perform solo would have been from the early 90’s, but nothing can top the experience of passing on the torch to another generation, who truly appreciates and loves the music as much as I do.

Special Thanks to Laura Schaaf and John Ostronomy for making it all happen!