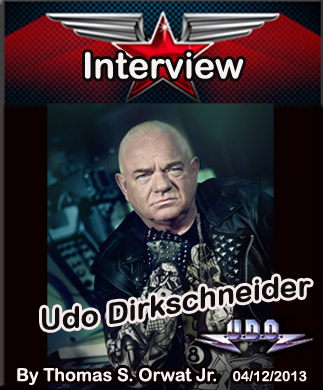 By Thomas S. Orwat Jr.
Legendary German, metal vocalist Udo Dirkschneider is back and touring North America with his band U.D.O. for the first time in twelve years. The 61 year old diminutive Teutonic terror of sound, is best known in North America for his time fronting the band Accept during the 1980’s, but his current band U.D.O. plays some of the biggest stages in Europe, and Central America.

U.D.O. kicked off their North American tour earlier this week in Amityville, NY, and will play twelve dates, concluding in West Hollywood, CA on April 23th.  Also, on May 21st the band will be releasing their long awaited studio record, “Steelhammer” on AFM Records.  In addition, all prior U.D.O. releases have been re-issued on AFM records and will be available in North America for the first time in years.

What follows is an exclusive RMS interview with one of the greatest vocalists in the history of metal – Udo Dirkschneider.  During this conversation, conducted two days after his 61st birthday, we discussed the recent line-up changes in U.D.O., the new record, “Steelhammer” and much more.  Here’s what Udo had on his mind.

RockMusicStar:  Hello Udo, I want to start off by wishing you a happy belated birthday.

Udo Dirkschneider:  Thank you very much.

RMS:  I hope that you were able to enjoy it.

UD:   Yes, I did.  I was very busy doing interviews.  But I got out and had a good dinner and a couple of beers and that was it.  But, I’m busy doing a lot of promotion for the tour and new release, so we really couldn’t have a big party.

RMS:  I can’t imagine that anything could be as fun as doing interviews all day long.

RMS:  Well, all I can do is promise that this will be the best one so far.

RMS:  You just turned 61, and I think it’s great that you are still performing metal at your age?  Did you ever think when you were starting out that you would be doing this for this long?

UD:  No, when I first started I never thought that I could still be doing this at 61. But, here we are and here we go.

RMS:  This is a pretty exciting week for you.  You are back in America for the first time since 2001. Why did you decide to come back now?

UD:  Well, we didn’t have a record company over here for a long time.  During the years, we’ve had some offers to play here, but we decided not to.  But now, AFM records, our German record company has an office here in America.  Now we have a promotion man, a booking company and things such as that.  So it’s all working well for us now.  And now our whole back catalog has just been re-released in America.  So now it makes sense to play here and see what we can do here.  So far, things are looking good.  There is a lot of interest and we are starting a short North American tour tomorrow.  We will see what’s going on for U.D.O. But so far, tickets are selling well, and there is talk about us coming back next year for a longer US tour.

RMS:  U.D.O. is very popular in Europe and especially Russia.  You have played some very high profile gigs over there.  But do you enjoy touring in North America, even though you’re not as popular as you are overseas?

UD:  I have some great memories of playing in America, especially with Accept. The audiences are always very good.

RMS:  What are some of your favorite cities to play and visit in America?

UD:  I like Boston, MA a lot.  I also like Austin TX, San Antonio TX, L.A., and San Francisco.  There are so many cities over here that are interesting.

RMS:  You talked about your label, AFM records, re-releasing your catalog in America and two of these releases just came out, “Live in Russia,” and “Best of. “  Do these re-issues have any addition material, such as bonus tracks, or are they exactly like the original versions?

UD:  No, nothing extra on those two, but on the others that were re-issued there are a lot of bonus tracks.  We pretty much put everything that we had on those releases, such as live recordings, remixes and unreleased tracks.

RMS:  In addition, you have a new recording called, “Steelhammer,” scheduled for release on May 21st.  How does this new recording differ from you past records, if at all? UD:   Well, first of all, Stefan Kaufmann is no longer with us; he was one of our guitarists and also our producer.  I also did all of the songwriting with him as well.  He told us that he could not be a part of U.D.O. because he has a health problem and needed a break.  So, then I started doing the songwriting and production with Fitty Wienhold (U.D.O. bass player).  With Fitty and me, we did the production a lot differently.  Stefan did a lot of it with computers, where I like to do it by having people in the room, working on it face to face.  As a result of this new style, we have a lot of diversity on the record.  There are songs with a full orchestra, and also a song with just me and a piano.  So, this record is a lot more down to earth, and live sounding.

RMS:  Was that a goal of yours, when writing and recording, to have a more diverse sounding record? UD:  Yes.  I wasn’t really that happy with our last U.D.O. record.  And I even told Stefan at the time, that I want to go back to our older recording style.  But when we recorded this new record, Fiddy and I went back to the old style, and the reaction that we have got to the new material is very positive.

RMS:  Will you be performing any new material on you current North American tour? UD:  No, not now.  The album comes out at the end of May.  If we do a song off of the new album, the next day it will be on youtube.  And I don’t think that the record company would be very happy about that.  But, maybe for the last two shows we play, we may perform our single, “Metal Machine,” because it’s scheduled to be released in mid-April.  But with the back catalog being available in the US again, we put together a setlist that has a good mix of U.D.O. songs and some Accept songs.

RMS:  You have two new guitarists in U.D.O., Kasperi Heikkinen and Andrey Smirnov.  Why did you pick those two guitarists and what was the audition process like? UD:   Well, we had to replace Stefan Kaufman first.  When we announced that he left, we received over 300 demos in the mail.  One of the guys was a Russian guitarist named, Andrey Smirnov.  I was really impressed with his playing and he has a great personality.  He came over for an audition and he stayed at the studio for five weeks and did all the guitar work on the new album.

And then, we didn’t plan on changing our other guitarist, Igor Gianola, but he said that he couldn’t be in the studio for four or five weeks.  So I said “Okay, I guess.”  But then in the beginning of the year, he said that he didn’t want to be in U.D.O., because it was getting to be too big and he can’t handle it anymore, blah, blah,blah.  So then we got Kasperi Heikkinen –  from Finland.  He was one of our top picks from the three hundred demos that we received.

RMS:  They were great choices.  I watched some recent live footage of U.D.O. on youtube and I was very impressed by both of them. UD:  Thank you.  This is a new chapter for U.D.O. and these guys are really amazing.  And they are very young and they put some fresh blood into the band.  It’s exciting to work with them.

RMS:  I remembering reading back a couple years ago, that you had started to write an autobiography.  Is this finished or are you still working on it?

UD:  I am still working on it.  However, I have been really busy during the last two years, so I really haven’t been able to work on it that much.  But now with everything being set with the band, I can now start working on it again.  But, I don’t know when it’s coming out.  Maybe, in two years, or something like that, but it’s something that I definitely want to do.  There are a lot of interesting stories from the beginning of my career, and funny stories from touring and my history with Accept.  So, it’s going to be a real interesting book.

RMS:  Over your career, you’ve played in many different countries, including some sketchy third world countries.   Have you ever played a gig in which you were worried about your safety?

UD:  No, not at all.  I always have felt comfortable and was never worried about any danger in any of the place that I’ve played.  We just played a show in Ecuador, and the people were good.

RMS:   You have had some great show overseas, especially in Russia.  Why is U.D.O. so popular over there?

UD:  Good question!  I really don’t know.  They really like the type of music that we are performing.  The first tour we did over there was very successful, and I don’t know why.  But we plan on doing a big tour of Russia for the new record.

RMS:  Is there anything that you would still like to accomplish in your career?

UD:  Well, I have never played in Australia.  And I would like to play there.   But I’ve accomplished a lot with U.D.O. and Accept.  And, I had a lot of highlights so far.For more on U.D.O., please visit http://www.udo-online.com

A BIG special thanks to Dustin Hardman for setting up this interview.