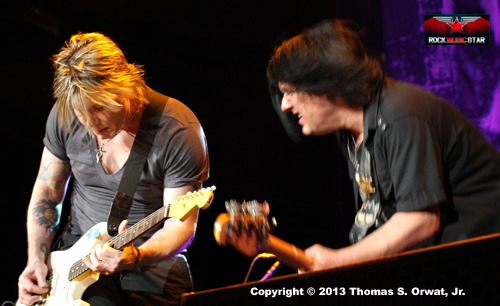 Darien Lake, NY- The Goo Goo Dolls made their triumphant return to their hometown of Buffalo, NY (Darien Lake is about 20 miles East of Buffalo), last Saturday evening. This show was a one-off from their extremely successful current co-headlining tour with Matchbox Twenty. The crowd of approximately 8,000 was in a party mood right from the start on this perfect, sunny summer day. Many tailgated in the parking lot prior to the show, with pop-up tents and beer pong tables set up everywhere. It was surprising to see so many younger, college-age adults in the crowd. It is a true testament to the Goo Goo Dolls’ ability to remain relevant, 18 years after their first major hit, “Name,” dominated the airwaves in 1995.

The Goo Goo Dolls hit the stage shortly before 9:00pm, a bit early for a headliner, and began their 90-minute set with the rocker, “Last Hot Night.” This song has been their opener for their current tour, and they opened with it the last time they played at Darien Lake in 2011. Band members John Rzeznik (vocals, guitar), Robby Takac (bass, vocals), and Mike Malinin (drums), along with hired hands, Korel Tunador (keyboards, guitar, saxophone), and Brad Fernquist (guitar), were focused, energetic, and spot on all evening long. Rzeznik especially was a bit more of his usual self this evening. He was talkative, insightful, and interacting with the audience. During the previous mentioned show in 2011, he seemed a bit tired and was much more subtle. This time around, Rzeznik was full of energy and beaming with confidence, and he should be. The Goo Goo Dolls are killing it every night on their current tour, and their amazing new record, ‘Magnetic,’ is a great piece of work that consists of some of the best material that Rzeznik has ever written.

After the “Last Hot Night,” the Goos slammed into their first hit, “Slide,” from their multi-platinum, chart-topping 1998 release, ‘Dizzy Up the Girl.’ Rzeznik smiled as the crowd went into frenzy, singing every word back to him.

The momentum continued with “Naked,” and then “Here is Gone” following. The band then played the infectious anthem, “Rebel Beat,” their first single from ‘Magnetic.’ And while this song was well received on radio when it was released as a single, it is really a song that you have to hear live to fully appreciate.

Shortly after, the Goos did a haunting, powerful version of another #1 hit, “Black Balloon.” This is such a perfectly written song, and the band takes it to another level. The mix of Rzeznik and Takac’s vocals always give me goose bumps when I see them perform this one. Robby Takac then took center stage for two of his intense songs, “January Friend” and “Smash.” And while Takac gets some criticism from some people because his vocals may be a bit harsh, his time in the spotlight is instrumental in helping the Goo Goo Dolls maintain their rock credibility and identity.

The Goos then went on to what I considered to be the highlight of the show, performing “Cuz You’re Gone,” off of their 1993 ‘SuperStar Car Wash’ release. The band has re-worked this track over the years, and while it was never a hit on the charts, it surely is a hit when they play it live. During this song, Rzeznik announced, “I’m going to do something that I usually don’t do.” And then followed by joking, “I don’t know what you are thinking, but I’m talking about this…” He then proceeded to play some tasty lead guitar work that he later described as “Some Grateful Dead shit.” I know Rzeznik has a lot on his plate, but it would make many fans happy to see him get back to playing more lead guitar, and not delegate so much of it to Fernquist.

Next was the biggest surprise of the evening, when the new single, “Come to Me,” was performed. Before performing it, Rzeznik came on stage holding up a sign and announcing that a gentleman was going to propose to his girlfriend during this song. And what a perfect song for it! Well, what a perfect song, period. This song could very well be the best song that Rzeznik has ever penned. Interestingly, it almost didn’t make it on the ‘Magnetic’ release, but, judging by the reaction that this song received on this night, it is going to bring the Goos to another level of popularity. This song is going to explode on the charts!!! It was also smart and cool having LED boards on stage, which flashed the words of the song so everyone could sing along.

The band’s first single, “Name” followed. Before this song, Rzeznik declared, “This song changed my life!” He continued, “When I opened the check that I received for this song, I took one look and I said, ‘I’m never working a job again!’” And, right he was. It was one hit after another for an incredible 18-year streak.

Takac then bounced back up to the mic for another round of two, with “Bringing On the Light” and “Another Second Time Around.” “Bringing On the Light” is actually one of the best songs on the ‘Magnetic’ album, and could fit in nicely on rock radio. Rzeznik’s songs do get all of the attention, but Takac should be really proud of this one.

The show ended with a string of four massive hits, “Better Days,” “Stay with You,” “Iris,” and finally, “Broadway.” Sideman, Korel Tunador, added some soulful and rockin’ saxophone to “Broadway.”

The Goos left the stage, but then shortly returned with a two song encore, consisting of “Sympathy” and the Supertramp classic, “Give a Little Bit.” This ended an amazing evening, which many in Western New York are calling the concert of the summer. This was simply a magical night, the band truly connected with their audience.

The Goo Goo Dolls will continue their tour with Matchbox Twenty. And, if I was in Matchbox Twenty, I would be a bit worried. Over the years, the Goo Goo Dolls have played on quite a few of these “opening” and “co-heading” tours, and many of the bands they supported were reduced to ashes afterwards. Just ask Soul Asylum, Sugar Ray, Bush, and the Counting Crows, just to name a few. Rzeznik, Takac, and Malinin are a resilient bunch. Many haters have prematurely declared them dead year after year, but they aren’t going anywhere except back to the top of the charts.  They have the Wayne Gretzky of pop songwriters in John Rzeznik. No current band has had nearly as many radio hits as the Goo Goo Dolls. It’s really been an incredible career, and it’s a long way from being over.

Special thanks to Jill Augusto, Lynn McDonnell and Dana Kaiser.