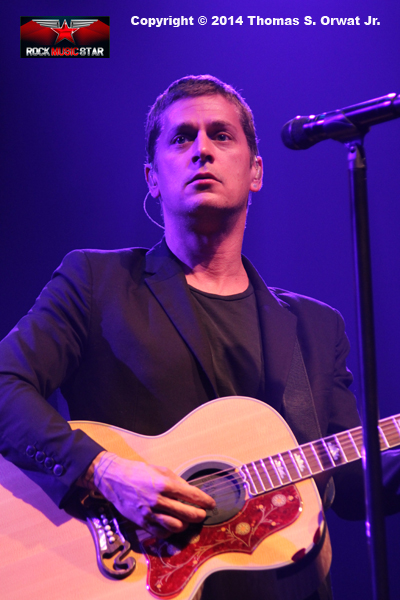 Niagara Falls, NY – Singer/songwriter, Rob Thomas of Matchbox Twenty, played a sold out, solo concert at the Events Center at the Seneca Niagara Casino.  This stripped down, two-hour-plus performance was in the style of the Vh1 “Storytellers” shows, in which the artist would explain the inspiration behind each song prior to performing it.  Rob Thomas flourished in this format; he was very entertaining, funny, and even a little dirty, as he dropped the F-bomb countless times throughout the evening.  The audience consisted mostly of soccer moms and couples in their 40s, who all seemed to enjoy every moment, laughing at all of Thomas’ jokes and cheering loudly after every song.  And, for the few that brought their young children with them, they can thank their hero for their children’s new colorful vocabulary and inquisitive questions about sex during their car ride back home.

The 42-year-old multi-platinum singer/songwriter was accompanied by long-time Matchbox Twenty collaborator and multi-instrumentalist, Matt Beck, and another guitarist.  The trio played a good selection of Rob Thomas solo songs, with a satisfying mix of songs from Matchbox Twenty, and a Jane’s Addiction tune, “Jane Says,” as well.  The sound mix was flawless and crystal clear on this evening; you could really hear the power behind Thomas’ pristine voice.  He sings his songs with such raw emotion and enthusiasm, as if he is singing them after he just wrote them.  Thomas performs as he is actually reliving the inspiration behind the song and not just remembering it.

Thomas started the evening with the track, “Mockingbird,” from his 2009 solo release, ‘Cradlesong.’  After the song, he thanked the audience for attending the show, and informed them that the proceeds from the show will help benefit his not-for-profit foundation – Sidewalk Angels, which he started with his wife, Marisol Maldonado. “I already have your money, so you might as well enjoy yourself,” joked Thomas.

He talked about his wife a lot during this performance.  He mentioned before his solo hit, “Her Diamonds,” that in relationships, over time, the problems get bigger. And sometimes, you can’t just solve the problems with a glass of water, or a blanket, or by throwing money at them. You just have to be there for the other person.

Thomas lightened the mood a few songs later, when he discussed his song-writing collaborations with Mick Jagger. He mentioned how Jagger left a message on his answering machine one day, and how he kept it for three years, playing it for his friends as if he didn’t know it was there, and acting as if Jagger was stalking him.

Before the piano ballad, “Street Corner Symphony,” Thomas explained that the song was his ode to Lionel Richie. He also joked about how he used to bring his Lionel Richie songbook to parties when he was in high school, and played those songs for girls in hopes to sleep with them after their “jock” boyfriends passed out from drinking too much.

When it was time to play his first big hit, the Matchbox Twenty song, “3 A.M.,” Thomas stated that it was the first song that he wrote in which he felt people really needed to hear. This song was written in regards to his mother’s fight with cancer when Thomas was a young teenager. Thomas would go to school and act like a 13-year-old, but would have to come home and have the responsibility of taking care of his ill mother.

Thomas also played two new tracks from his upcoming solo album, scheduled to be released later this year. One of the songs, “I Think We Feel Good Together,” was about one night stands becoming more than just that.  He followed that up with, “Heaven Help Me,” which was explained as being about how his brain acts like a 21-year-old at times, causing him to make bad decisions.

The second last song of the evening was “Smooth,” the huge #1 Grammy Award hit that Thomas recorded with Carlos Santana. He commented that Santana has become a very good friend of his. He also mentioned that the first time that he met him, Santana was wearing a banana yellow suit. “That was the first time in my life that I thought to myself, I needed a banana yellow suit too, so I could be cool, like him,” laughed Thomas.  But, he also explained that Carlos taught him a very valuable lesson, which was to “Try very hard to be a popular songwriter, and perfect your craft, and not just try to be a celebrity. Because, a celebrity is really nothing at all, and it can disappear very quickly.”

The evening ended with Thomas playing what he claimed was his favorite Matchbox Twenty song, “Bright Lights.”

Thomas proved on this night that he is a very talented singer/songwriter/musician, and also a very good entertainer. He should maybe consider doing a stripped-down acoustic show with John Rzeznik of the Goo Goo Dolls. I think that the two of them together would make an incredible double bill, just like when Matchbox Twenty and the Goo Goo Dolls toured together last summer.

Setlist
Mockingbird
Fallin’ to Pieces
Sunday Morning, New York Blue
Her Diamonds
Getting Late / That’s All Right
Disease
Ever the Same
Streetcorner Symphony
You Won’t Be Mine
Lonely No More
3 A.M.
Someday
Bent
I Think We Feel Good Together
Heaven Help Me
Jane Says
Unwell
Little Wonders
This Is How a Heart Breaks / Jenny (867-5309)
Smooth
Bright Lights

Thank you to Tony Astran and Dana Kaiser.