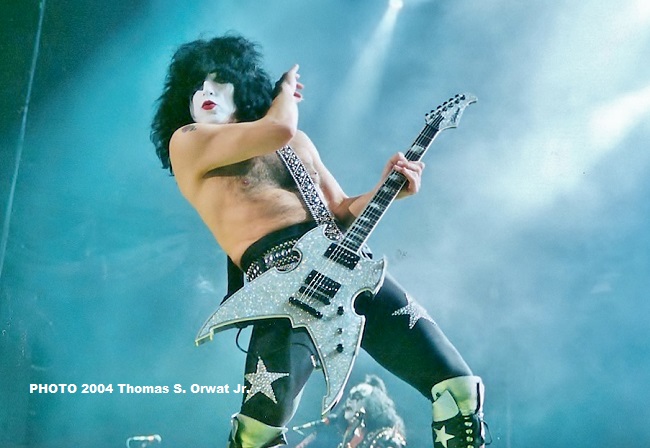 Darien NY-You wanted the best and you got the best!!! The hottest band in the world-KISS!!! Yes, even after all these years- thirty to be exact, Kiss still remains as one of the hottest bands in the world. Well, at least as far as their stage show, merchandising and fan dedication goes. The 7,000 plus audience worshiped their heroes on this night (many in attendance have been fans for the full 30 year history of the band and others were witnessing their first concert ever) with their rapid reaction to every note that the band played and by stocking up on merchandise. Yes, with Kiss it doesn’t matter if a t-shirt costs $35.00, it’s a necessary purchase for legions of die-hard fans referred to as the Kiss Army. It’s Kiss and Sell baby, that’s what it’s all about. Gene Simmons, bassist/singer/co-leader of Kiss, is Rock n’ Roll’s Donald Trump. He takes advantage of every avenue for merchandising and making money. Hell, you can even buy Kiss condoms, tongue lubricated by Gene himself, or so that’s what they claim. Well, I’m a fan, but I think that my wife and I will pass on that one.

Kiss, who currently consists of original members Simmons and partner Paul Stanley, are now joined by guitarist Tommy Thayer (who has worked on various projects with the band for almost twenty years) and drummer Eric Singer (who was in a non make-up version of the band from 92-96). Thayer and Singer replaced original members Ace Frehley and Peter Criss to the dismay of some loyal fans. However, on this night, no one in the audience seemed to mind the fact that Frehley and Criss were no longer aboard. The new version of Kiss is the band’s best line-up ever. Singer is argumentatively one of the greatest drummers in rock right now, a big difference from Criss who struggled nightly on previous tours. And Thayer plays Frehley’s licks better than Frehley could ever play them. The band now has musical muscle, which is something that the original line-up never really had. They have even been changing their once stagnate set-list and throwing in some songs that haven’t been played in decades.

On this evening Kiss stormed the massive, elaborate stage with the typical pyro-explosion and kicked off the night with a fan favorite from 1977, “Love Gun.” It was obvious that the band had the crowd in the palm of their hands from the very first note. Kiss looked great with their vintage era costumes and seven-inch heel platform boots. The Kiss Army pumped their fist in the air, ecstatic to see their heroes. Simmons then took the mic for the classic “Deuce” from the band’s debut 1974 release. Stanley then told the audience “it’s time to go old school” and then proceeded into “Making Love.” Then Stanley asked “How many of you like to be licked?” Of course everyone knew that the 1983 classic “Lick It Up” was next. Stanley’s stage banter at times was just down-right funny, in a Spinal Tap type fashion. “Hey People” was one of his more often used phrases and it’s funny how a born New Yorker can have such a southern drawl. But, regardless, there will never be another Rock front-man like him, the mold was broken.

“Christine Sixteen,” followed and the band broke into an interesting instrumental which showcased Thayer’s guitar flair. Then a song the band hasn’t played in a long time from the 1974 ‘Hotter than Hell’ release “Got to Choose.” The seldom played “War Machine” followed and was one of the highlights of the show. “I Want You” followed with Stanley showing off his vocal ability and then him turning to the crowd for some audience participation. “Ballsy Buffalo, I want to hear you sing” he screamed. The Kiss Army obliged. “Psycho Circus” from their 1998 come-back CD followed, with Stanley asking, “Buffalo, do you feel like animals? Do you want to get crazy?” Simmons then again took lead vocals for the rocking and one of the best tracks in the Kiss catalog “I Love it Loud.” Stanley went back to center stage for “100,000 Years.” Soon after Simmons did his vomiting blood routine and was lifted to the top of the stage for an intense, raspy version of “Unholy” from 1992’s ‘Revenge’ release.

“Shout It Out Loud” followed, then the 1980 disco influenced, “I Was Made for Loving You” was next, in which Stanley was transported out to the back of the amphitheater to a mini-stage and performed for all the “People in back who must have slept in the day tickets went on sale.” Stanley came back to the main stage and the band stormed into “Detroit Rock City.” The newest band members of Kiss shone on this one. This song featured some amazing guitar work compliments of Thayer and equally impressive skins bashing form Singer. Then after a pro-America, support the troops in Iraq rant by Stanley, the band played “God Gave Rock n” Roll To You.” After the song many in the audience chanted U-S-A. It’s good to see that even a band like Kiss can get patriotic at times. Stanley then encouraged everyone in the audience to go out and vote as the evening ended with piles of confetti falling from the sky as the band played their biggest hit, the anthem “Rock n’ Roll All Night.” This ended an amazing night, I’ve seen Kiss many times before and this was the most impressive show yet. Truly, a show not to be missed.

In addition, at the end of the performance, fans had one more opportunity to add an additional item to their Kiss collection and remember this show forever by purchasing an Instant CD for $25.00. Take it from this fan, it was worth every penny and one of my most cherished Kiss collectibles.

Love Gun
Deuce
Makin’ Love
Lick It Up
Got to Choose
War Machine
Christine Sixteen
I Want You
Psycho Circus
I Love It Loud
100,000 Years
Unholy
Shout It Out Loud
I Was Made for Lovin’ You
Detroit Rock City