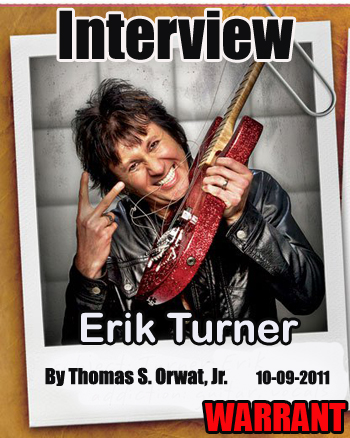 With the music industry in a decade long, downward decline, it sometimes takes innovative ideas to help an artist generate revenue and remain in the public’s eye.  And Erik Turner, guitarist in Warrant, is doing just that.  With the guidance of renown wine creator, Kristain Story, Turner created an award winning wine called “Warrant Red.”  Warrant fans and wine connoisseurs have responded with great praise and open wallets.  With the “Warrant Red” 2007 vintage already sold out, Turner is now promoting the 2008 vintage.

What follows is an exclusive RMS interview with Erik Turner, in which we discuss the “Warrant Red” brand of wine.  In addition, we also touch on the recent and tragic passing of ex-Warrant singer Jani Lane, and the future plans of Warrant.

RockMusicStar: Hey Erik, we are talking today because you have a new product out. And it’s not the usual CD or DVD, but a something a bit different. You just started promoting “Warrant Red,” which a unique red wine that you helped create with the award winning wine maker, Kristian Story. Interestingly, this business venture is more about the brand of Warrant than it is about the band, right?

Erik Turner: Yes, that’s correct. But you have the name Warrant in there, so it is about Warrant. It’s just a new little side venture for us. We had an opportunity to work with Artist Wine and Kristain Story wine late last year. And Kristain Story and I put together a blend, which is a 2007 Napa Valley red wine. If you drink it, it will make you feel good and it will make you look good.

RMS: So do you anticipate that you fans will purchase this wine and just chug it immediately, or do you think that most of them will save it for a special occasion or even just keep it unopened, as a souvenir? Because wine does taste better in time.

ET: Yes, it sure does! But ours already tastes fantastic. But we have already sent some bottles as gifts to people that we work with. And I’ll ask them what they think and a few have already told me that they weren’t going to open it, they wanted to save it. (Laughs) And I’m like, drink it, and I’ll get you another bottle. So, I would think it’s going to be a bit of both. I would recommend that you buy one to drink and another to save. But, the 2007 vintage that we did, is already sold-out. So we are now looking at a 2008 vintage. The 2007 vintage had a much thicker bottle. It was real heavy and expensive; the street cost was $37.00 a bottle. But this year, we made some changes to the bottle and we were able to get the street price down to $25.00 a bottle. But, it’s the same exact vineyard wine, just a different harvest. But, yeah we are very excited about this.

ET: Thanks. Yeah, it was Bob Schwartzlander (who works for Artist Wine) and I, that created the label. We worked together quite a bit until we created something that we both really loved. We did about 25 different versions of it. And it’s hard doing that balancing act. On one hand, it’s a wine label, so it has to look like that, but on the other hand, we’re a rock band, and it has to reflect that as well.

RMS: It seems like this was a very time consuming venture, not just creating the label, but actually coming up with a unique blend of wine.

ET: You’re right. But the process of coming up with the blend was a lot of fun. First, I went over to the co-owner of Artist Wines house. He’s a friend of mine, and he’s kind of the one that set this all up. He has a beautiful home in wine country and we were hanging out, and he brought out a whole bunch of different wines that didn’t have labels on them. So, I did a blind taste test of six or seven wines on that day. I told him what my two favorites were and he said it was ironic, because both of them were from Kristen Story’s winery up in Napa. One was a gold medal award winning wine called, “Rhapsody,” which I just fell in love with. It’s still probably my favorite wine, besides “Warrant Red” of course. (LOL) So, he introduced me to Kristen Story and he stated sending me a bunch of different types of wine to taste and try, and we ended up with the “Warrant Red” blend.

RMS: And Red wine is good for you, in moderation.

ET: Yes! I think for males, it is recommended to drink two to three glasses a day. I oblige, and listen to my doctor when he tells me to drink a couple glasses of red wine because it is good for you. But, you shouldn’t over do it, because a wine hangover is no good.

RMS: You seem rather passionate about this project, how long have you been into wine tasting?

ET: I’m actually a very late boomer to the wine world. My cousin, Liz, when I was twelve, basically made me drink some wine and champagne. I get sick and threw up, it was awful. So, I hated wine. But then in 2007, I was camping and one of my cousins had some wine, for some reason I decide to try some, and I really liked it. So, that got me going on drinking wine. Then all of a sudden I have this opportunity to work with an award winning wine maker.

RMS: You’ve had a few business ventures outside of playing in Warrant. Is this project your favorite one so far?

ET: Yeah, this is the funniest thing besides playing rock n’ roll, drinking and sharing wine. We do these wine events where we go to fine restaurants and eat all this great food and seven course meals and share the wine with thirty to forty people. Sometimes, I‘ll play some music at the event. It really is great and I’m really enjoying it.

RMS: Yeah…Erik if it’s ok, I would like to take a few minutes and discuss the recent passing of your former lead singer Jani Lane. I know about all the issues that the band had when he returned in 2008, for a short period of time. But were you shocked when you heard the news or did you kind of expect that it was just a matter of time?

ET: For those of us that had known Jani….I’ve known since 1986, when he joined the band. We had a lot of good times and a lot of bad times. In 2004, he was no longer in the band; we had to make a change. And then we tried it again with Jani in 2008, but his old demons popped up again, and it made it impossible for us to function as a band. It was a huge disappointment because we were all very excited about the reunion.

RMS: Everyone was very excited about that.

ET: Yeah, I know. But we had no choice and we had to get a new lead singer, which we got Robert Mason, who was in Lynch Mob. He’s done a beautiful job filling in for Jani. But it was frustrating during that reunion time with Jani. We tried to be supportive; we would visit him in rehab as much as possible. The band paid for a sober coach to come on the road and try to keep Jani sober. We took all of the alcohol off of the tour rider. None of us were drinking. But he would just sneak off and disappear, and show up intoxicated later, or sometimes, he wouldn’t even show up. And he would have a hard time performing in his state. It was very stressful and disappointing for the band. But that’s all I can really say about his passing. It’s very sad and disappointing. Anytime that someone has all of that talent, and everything to live for, and for whatever reason, I just don’t know, he just couldn’t stop. It’s awful. It’s horrible for his kids and his family. I hadn’t spoken with him since 2008, we weren’t close anymore. But, it was still very hurtful to hear.

RMS: When he returned in 2008, was there ever a time when the band gave him an ultimatum to get sober or get out?

ET: Yes, but it was hard to talk to someone who didn’t know what planet they were on, or someone who wouldn’t return your calls. We did talk to him; we told him we were going to get a sober coach to help him. We visited him in rehab. Our professional sober coach, who works with musicians, athletes and movie stars – he does this for a living. He couldn’t even keep Jani sober on the road. It was so bad, that the sober coach quit. He said there was nothing that he could do, and there is nothing anyone can do. He said that Jani was just completely out of control. We were like, “What the fuck are we paying you for?” It’s frustrating when you are in a situation like that because you are helpless. He didn’t care about Warrant or me, all he cared about was partying.

RMS: I remember watching his performances during 2008, it seemed like he would have a really bad gig and then return with a good one. He did well at the Rocklahoma gig.

ET: He had been in rehab for seven days before Rocklahoma. It would have been nice if he told us, because we had no idea where he was for seven days before. It wasn’t until 8pm that day of that show that he finally showed up. It really stressed out the band and the promoters. We had no idea if we were going to be able to play. It was just extremely stressful and very uncool. Out of the nine shows that we did, he was only sober for one, or maybe two of them. And an FYI, when you get out of rehab, you’re really not sober, they just put you on meds to prevent you from getting sick and relapsing.

RMS: I didn’t realize that.

ET: Yeah, it’s not like you just go in and quit cold turkey, it’s a whole big process.

RMS:  I see.  Well, let’s please end the interview on a more positive note.  Do you have any other unique merchandising plans for Warrant coming in the near future?

ET: No, not right now. We are concentrating on working on a new video for the song called “Home.” It’s a ballad in the 80’s style true tradition. We are very excited about this video. And we played about 45 shows this year, mostly between Memorial Day and Labor Day. And we still have some more upcoming shows this year. We are also writing new material for our next release. We have some cool merchandise on our site www.warrantrocks.com . We are also designing some cool new shirts, writing music, playing shows and pimping wine and having fun doing it. We are blessed that we are still able to do this.

“Warrant Red” can be purchased at www.artistwine.com