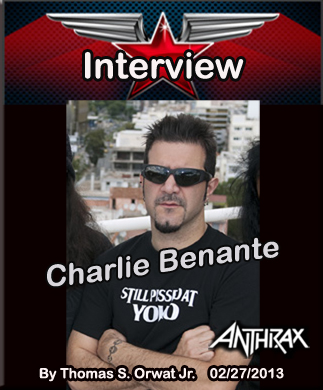 The recent resurgence of the thrash metal pioneers, Anthrax may be one of the greatest comebacks stories in rock history. They were one of the original bands of the thrash metal movement during the early to late 80’s, and had achieved their greatest success during this time period.  They were also very influential, as many credit them with being the first band to mix hard rock with rap, when they collaborated with Public Enemy in 1991.  However, in 1992 core band members Charlie Benante – drums/songwriter, Scott Ian – guitars, and Frank Bello – bass decided to fire vocalist Joey Belladonna, after signing a multi-million deal with Elektra records.  They replaced Belladonna with Armored Saint vocalist John Bush.  And although, they released some great records with Bush, it just wasn’t the same, and the band struggled for almost two decades.

However, over the last two years, Anthrax have re-emerged as one of the most powerful bands in the hard rock/metal scene.  It started in 2010, when the band re-united with classic era vocalist, Belladonna.  Soon after, Anthrax found themselves playing to pack stadiums in Europe as one of the bands on the “Big 4” tour, which featured other thrash metal legends:  Metallica, Slayer and Megadeth.  And then, Anthrax showed the world they were indeed back and better than ever with the release of their hard hitting, well crafted and arguably the best record of their career, “Worship Music.”

It was not just their fans that loved “Worship Music,” it caught the attention of the mainstream music community as well.  The song “I’m Alive,” from the record was nominated for a Grammy award in the category of Best Hard Rock/Metal Performance.  And while many think being nominated is all that matters, Anthrax wanted a win.  As explained by Charlie Benante during a recent conversation with RockMusicStar.

“I got really got caught in the Grammy’s,” stated Benante. He continues, “I thought that we were finally going to get the recognition that we deserved.  I started to think that maybe, we were meant to win it.  I didn’t know about the other bands, and the amount of blood and sweat that they put into making their releases.  We put a lot into, ‘Worship Music’ and it would have been nice to great that recognition by winning.  But, I guess… being nominated is alright too.  But regardless, the most gratifying feeling was seeing the great reaction we got from our fans for ‘Worship Music.'”

But even with all great happenings with the band, Benante has faced a bit of personal adversity recently.  While Anthrax is currently touring overseas in India and Australia, Benante is at his home in Chicago, IL due to legal issues that prohibited him from leaving the country.  When asked about this predicament, Benante stated, “Yeah, it sucks! But, I don’t really want to go into that.”  However, he continued by saying, “I’m still involved with doing a lot of band related things here.  I’m working on t-shirt designs for the upcoming US tour, and working on the business end.  I also talk to those guys everyday to see how things are going over there.”

Benante will be back behind the drum kit when Anthrax tours America starting March 22, when they headline the “Metal Alliance” tour.  The tour will also feature thrash metal veterans, Exodus.  But for the US fans, they will see a different lead guitarist than on past tours, as Rob Caggiano unexpectedly recently left the band.  Benante was surprised by Caggiano’s departure, “Rob leaving caught us by surprise, we didn’t see it coming.  I guess that he just want to do a little more, maybe as far as producing, I don’t really know what to think” says Benante.  After Caggiano resigned, many fans had hoped that classic line-up guitarist Dan Spiltz would re-join the band, thus completing classic line-up.  But Benante put an end to that notion quickly, “No!  It wasn’t something we considered.  I did read that some fans wanted him back.  But we, as a band, never discussed it.”  Anthrax has recruited Shadows Fall guitarist Jon Donais to play on the bands current tours.

In addition, Anthrax will be releasing a long awaited EP of cover songs, entitled “Anthems” on March 19th.  This EP will consists of cover songs by classic rock artists, Boston, AC/DC, Rush, Cheap Trick and Thin Lizzy.  Benante explains, “This isn’t a follow up to “Worship Music,” it’s just an EP of covers of songs that we love and that we want to get out to the fans.”  As far as new studio record and follow up to “Worship Music,” Benante declares, “We have some ideas, and bits of piece of things, but nothing I want to really talk about yet.”

We concluded our conversation with Benante by asking what has been his favorite highlight of the last two years.  He gave a quick response of, “Playing Yankee Stadium on the ‘Big 4’ show.  It was an amazing day for Anthrax playing there.  Even though we knew that it would be difficult for people to get into Yankee’s stadium on a weekday afternoon.”  When asked if that performance would ever be released as a DVD, he sadly explained, “We couldn’t film a video because of all cost associate with filming there.  For instance, every time the Yankee’s logo appeared in the video we would have to pay a certain amount to have that image shown.” However, Benante was elated that their “Big 4” run was documented nonetheless as he stated, “But at least we got one of the “Big 4” shows out and on DVD.”