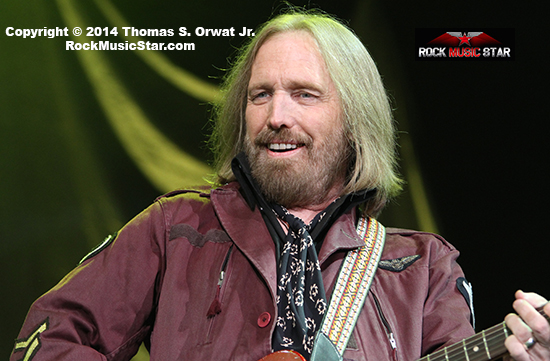 Darien, NY – Tom Petty and the Heartbreakers returned to Darien Lake PAC on Sunday evening for hit-filled, two hour-long performance. This was the 63-year-old, Rock n’ Roll Hall of Fame inductee’s first performance at Darien Lake since his two shows in 2010. Although this show failed to sell out, possibly due to the high ticket prices, Petty proved to the 13,000 in attendance that he is still a relevant music force, four decades into his career.

Tom Petty and the Heartbreakers hit the stage at 9:00 pm, and performed the Byrds’ classic, “So You Want to Be a Rock ‘n’ Roll Star.” Petty and band sounded really good, which can sometimes be a bit of a challenge in a venue not exactly known for it’s great acoustics. 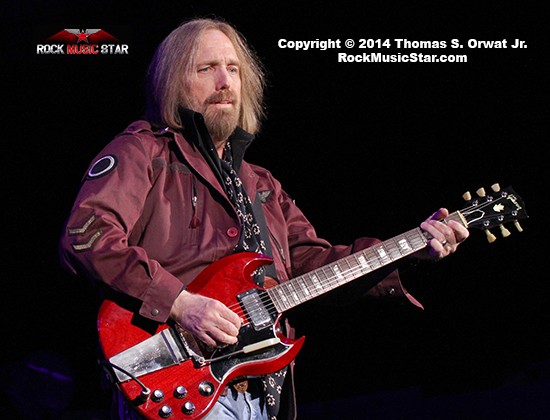 Three songs into his performance, Petty played a track, “American Dream Plan B,” from his critically acclaimed new record, ‘Hypnotic Eye.’ During this evening, Petty played four songs from his latest release and, although some of the causal fans decide it was a time for a bathroom break and an $11.00-a-can beer run, the diehard fans welcomed the newer material.

After the track, “Free Fallin’,” from his solo 1989 album, ‘Full Moon Fever,’ Petty explained that he wished he wrote the “Happy Birthday” song, because people sing it everyday. Then, one song later, Petty led the audience to sing Happy Birthday to Heartbreakers’ keyboardist, Benmont Tench, who was celebrating his 61st birthday.

Heartbreaker guitarist, Mike Campbell, did not go unnoticed with his amazing guitar skills. He is an extremely valuable asset to Petty, and a brilliant musician.

Midway through the concert, Petty slowed things down a bit and strapped on an acoustic guitar for the deep track, “Two Gunslingers” from the 1991 release “Great Wide Open.” Petty explained before playing the track, “I’ve always liked this song, so I’m going to play it for you.”

In addition to the outstanding musicianship and tight performance of Petty and the Heartbreakers, one of the most interesting aspects of this show was the age range of the audience. With many classic rock shows, the majority of the audience is 45 years of age and older. However, on this evening, there was a larger number of college-age, young adults rocking along. This is a true testament to the timelessness of Petty’s amazing catalog. It truly transcends from one generation to the next without skipping a beat.

The evening ended with a rousing encore of one of Petty’s most popular songs, “American Girl.” Petty and the Heartbreakers played an unforgettable, flawless and passionate performance. It was a memorable night, and a great way to close out the 2014 outdoor concert season in WNY.

So You Want to Be a Rock ‘n’ Roll Star
Mary Jane’s Last Dance
American Dream Plan B
Into the Great Wide Open
Forgotten Man
I Won’t Back Down
Free Fallin’
A Woman in Love (It’s Not Me)
U Get Me High
Rebels
Two Gunslingers
Yer So Bad
Learning to Fly
Shadow People
I Should Have Known It
Refugee
Runnin’ Down a Dream
Encore:
You Wreck Me
American Girl