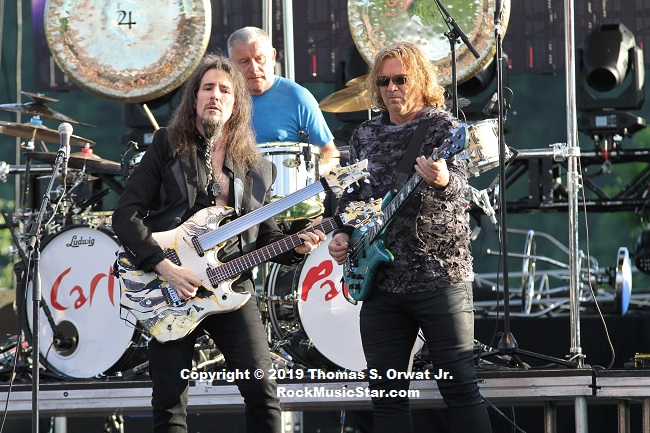 The Kings of prog-rock gather at Artpark for a musical Royal Affair.

For fans of classic prog-rock, there was no place in the world to be other than Artpark in Lewiston, NY on Tuesday. ‘The Royal Affair Tour,’ featuring Rock n’ Roll Hall of Fame inductees Yes, along with multi-platinum selling artist Asia, Moody Blues member – John Lodge (also inducted in the Rock n’ Roll Hall of Fame), and Carl Palmer’s ELP Legacy (featuring Arthur Brown on vocals) performed an epic four hour long night of music for 4000 appreciative fans on a beautiful warm and sunny summer evening. 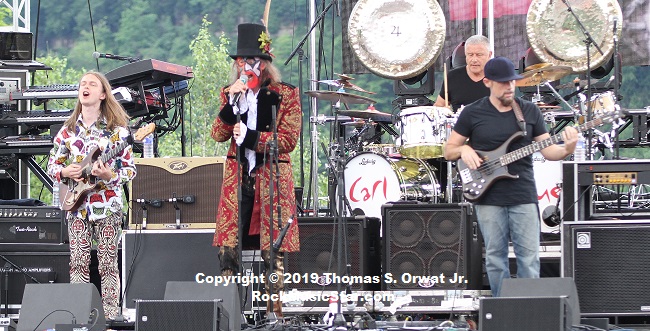 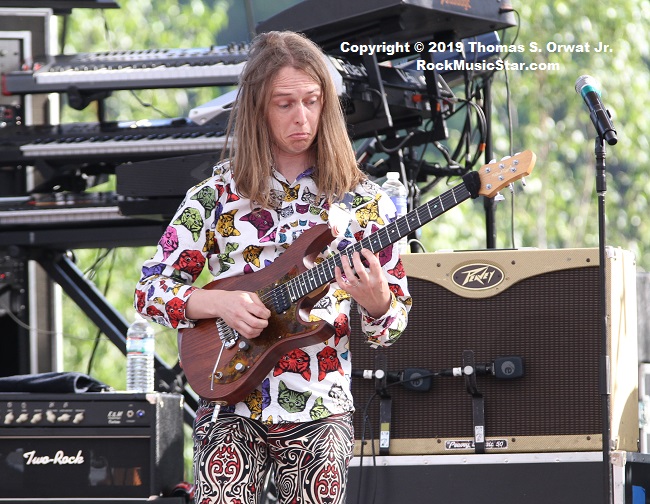 Their five song, 30 minute long set really showcased the great musical talent in the band. It was very satisfying to hear some classic Emerson, Lake & Palmer songs performed.  But the highlight truly was seeing the dynamic Arthur Brown take command of the stage and mesmerize the audience with his outlandish stage presence. 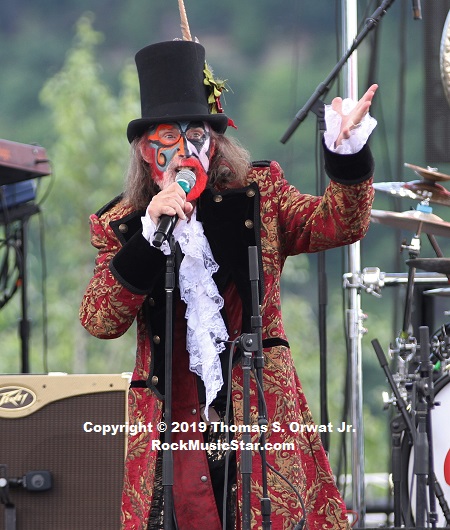 Before playing the classic track from The Crazy World of Arthur Brown – “Fire,” Palmer explained that he joined the Arthur Brown band in 1968, when he was just 18 years old. He then continued by explaining that the song went to #1 on the charts, and how naive he was, at the time, thinking that it was so easy to get a number one hit.

The final song of their set, “Fanfare for the Common Man,” had Palmer, Bielatowicz and Pastorious dazzling the audience with their spectacular and intense rendition. 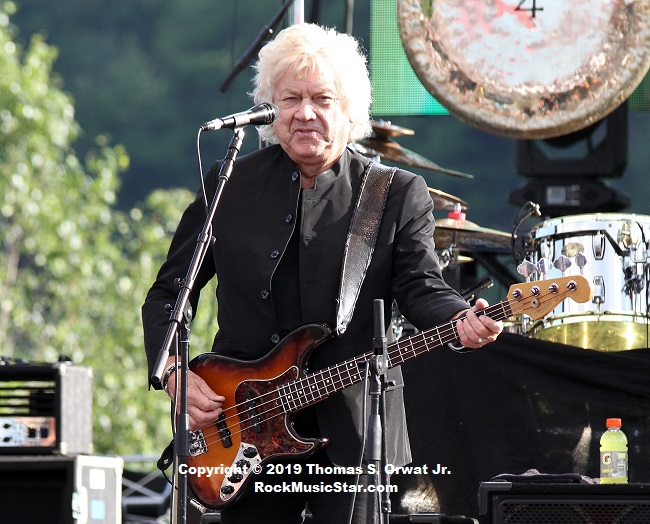 John Lodge, bassist of the Moody Blues, and his back up band 10,000 Light Years Band was next up at 6:35 pm. With the Moody Blues not touring as much lately, Lodge has turned his focus to touring and recording with his new band, which consists of Duffy King- guitar, Jason Charboneau -cello,guitar, Billy Ashbaugh – drums and Alan Hewitt – keyboards.

Lodge, who at the age of 73 was spot on both vocally and musically, had the audience hanging on to every note with his passionate version of “Isn’t Life Strange.” Guitarist Duffy King’s unique guitar tone greatly enhanced all the songs, giving them a more modern and hard rock edge.

An energetic version of  “I’m Just a Singer (In a Rock and Roll Band)” followed and had many rocking out and singing along. His closing track, “Ride My See-Saw” had YES singer Jon Davison join him on background vocals.

Lodge’s seven song set was very well received, (many felt that he was the best of the four bands performing on this evening) and primarily focused on Moody Blues songs that he wrote or co-wrote with his partner Justin Hayward.

Throughout this night of the “replacement cogs of prog,” definitely the highlight was the re-emergence of Asia, with it’s new lineup, featuring Ron “Bumblefoot” Thal as lead vocalist and guitarist. As Bumblefoot is mostly known from his time in Guns n’ Roses and by the diehard fans who follow his solo career (and miscellaneous projects), Ron is mostly known as virtuoso lead guitarist. And although he does play guitar in Asia, Bumblefoot’s role in Asia is somewhat different, as he is the lead singer/front man, who also happens to play guitar.

Replacing original vocalist, John Wetton, who passed away from colon cancer in 2017, Ron has very big shoes to fill.  Not attempting to be a “look-alike” or a “sound-alike,” Thal just put his heart and soul into singing classic Asia tunes like, “Sole Survivor” and “Only Time Will Tell.” 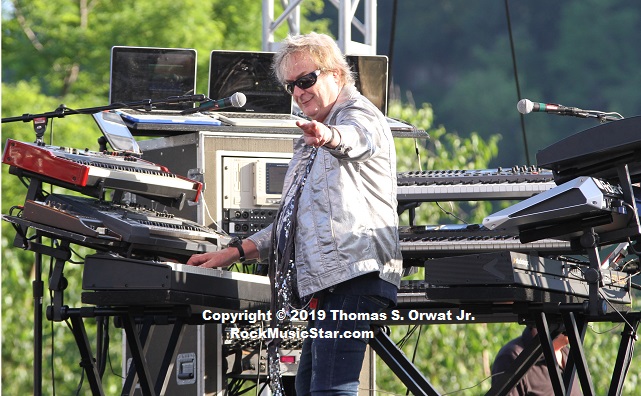 Joining Bumblefoot in this current incarnation of Asia is drummer Carl Palmer (who played earlier, opening the show with his ELP Legacy group), and keyboardist Geoff Downes and bassist Billy Sherwood (both Downes and Sherwood closed out the night, performing with the headlining band, YES). Current Yes axe-master, Steve Howe, performed as the sole guitarist with his former group, for the last 4 songs of their short, but enjoyable, 9 song performance. 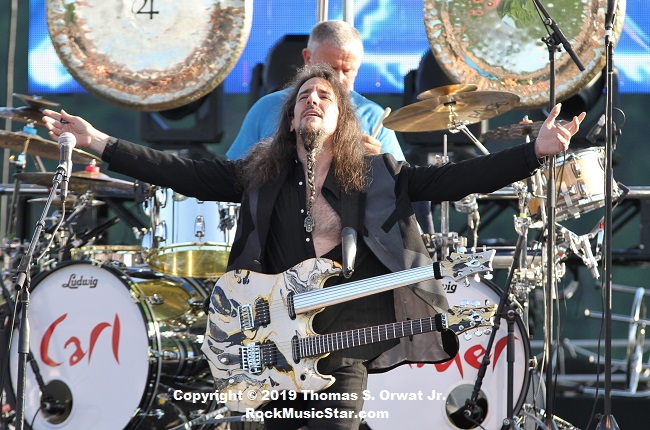 Ending the set with arguably their biggest hit, “Heat of the Moment,” Bumblefoot led the band like a true front man, pulling the energy from the crowd and getting everyone to sing along during the chorus sections. Asia definitely struck gold with Thal, and I for see this lineup carrying on the legacy of this band for many years to come. 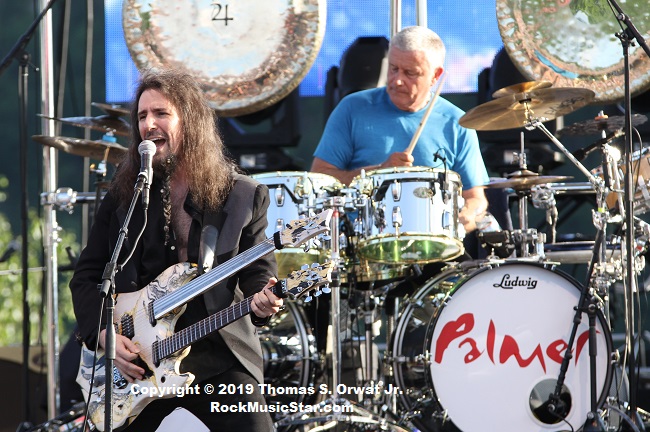 After Asia’s set, there was the first intermission break between bands. Up until that point, there was no stopping. It was one band performing right after another, which was extremely efficient, but probably not ideal for beer sales. During this 30 minute break, Arthur Brown, Ron ‘Bumblefoot Thal,’ David Pastorious, and Paul Bielatowicz met fans and posed for photos at the merchandise stand. Also, legendary YES/ Asia/ John Lodge/ Uriah Heep album cover artist, Roger Dean had his very own merch tent, in which you could meet him and purchase prints of his mind bending, brilliant artwork.

At 8:20 pm, the headliners YES made their way to the stage. The band played a 90 minute set that featured a few rare tracks to the delight of their die-hard fans, but were a bit of a struggle for the causal fans in the audience due to their length combined with their unfamiliarity.

Even some of the more devoted fans questioned the legitimacy of this particular line-up of the band, because only guitarist Steve Howe, and drummer Alan White (who is only performing on few songs on this tour due to health issues) are the only members representing one of the classic incarnations of YES. It actually is a point well taken. 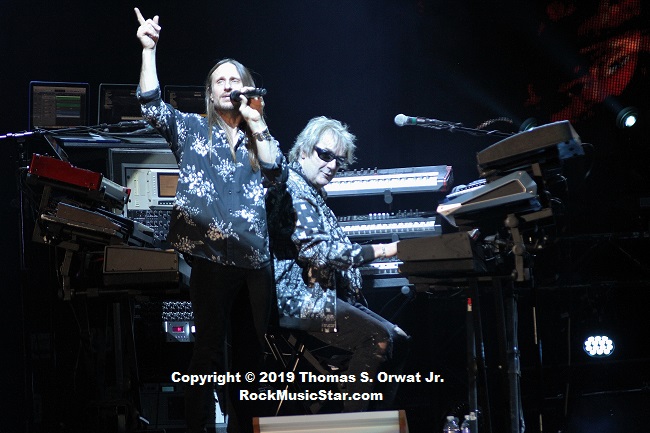 While this current line-up has very seasoned and talent musicians with Geoff Downes – keyboards (Downes was a member of YES for the album and tour cycle of the album, ‘Drama’ in 1980) Billy Sherwood – bass, (kind of like YES’ version of Tommy Thayer of KISS, and involved with the band and band members on and off since the mid 90’s) vocalist Jon Davison and Jay Schellen (who is sharing the drumming duties on this tour) there seems to be too many parts replaced, sadly resulting in some of the great YES magic missing from their live shows. 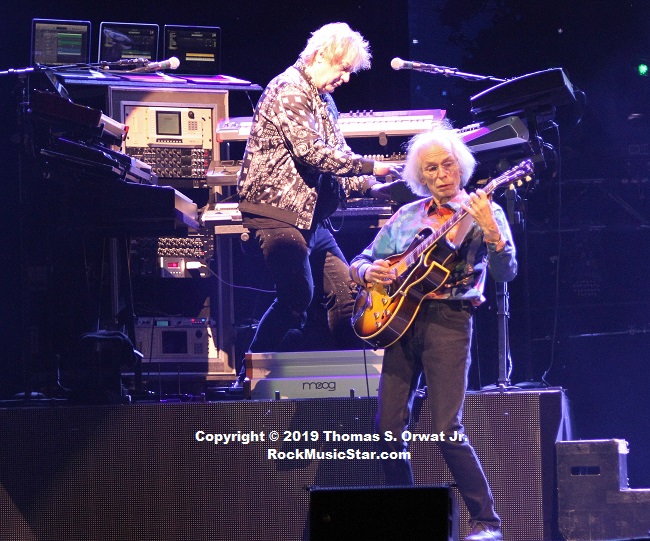 During the set, Davison, who’s first name also is oddly the same as the classic YES vocalist Jon Anderson, sounded at times as if he was trying to impersonate Anderson, as opposed to actually singing. His voice lacked the richness of Anderson’s. Bassist Sherwood put up a great effort, but there will only ever be one Chris Squire, who passed away in 2015 of leukemia, and his shoes will never be adequately filled by anyone.

However, the presence of Steve Howe and his incredible guitar work was worth the price of admission alone. Even at 72 years of age, Howe is still an uncompromising force on guitar for his performances with both Asia and YES.  On this evening, he was the most impressive musician in an all-star cast of incredibly talented and gifted performers. His performance of the instrumental, “Clap” was jaw dropping and his solos throughout the evening were of guitar-god status.

YES ended the show with a two song encore, which included an interesting version of John Lennon’s “Imagine.” This song featured drummer Alan White, who played in the John Lennon band and played drums on the original recording of this timeless song.

No Opportunity Necessary, No Experience Needed
Tempus Fugit
Going for the One
I’ve Seen All Good People
Clap
Siberian Khatru
America (with Alan White)
The Gates of Delirium (with Alan White)

Overall, The Royal Affair Tour was a great bill and probably the best classic rock tour in North America this summer. Carl Palmer’s ELP Legacy, John Lodge & 10,000 Light Years and Asia were truly spectacular.  The only thing that could have made it even better would be if  YES had Jon Anderson and Rick Wakeman, along with Howe in their line-up. For YES fans, one can only hope that just maybe one day this will happen.

Special thanks to Maria Hays for providing Rock Music Star with press credentials to this event.