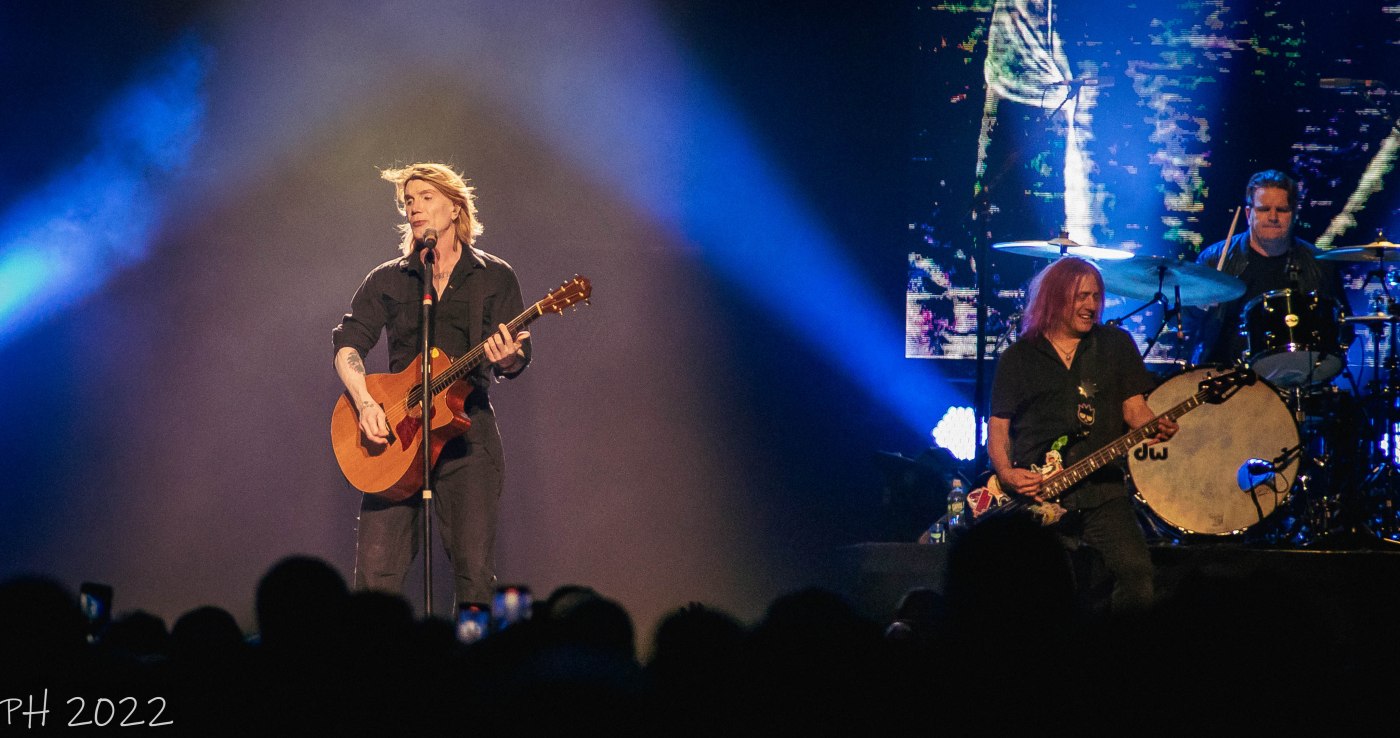 The champions of rock music- the Goo Goo Dolls return home for an emotional and passionate, packed arena concert

Buffalo, NY- When the muti-platinum selling, chart topping band the Goo Goo Dolls return to their hometown of Buffalo, NY to perform, it’s not just a concert, but a major news headlining event. As a result, this day was officially proclaimed Goo Goo Dolls day in Erie County, NY by Erie County executive Mark Poloncarz. As expected, this turned out to an epic event for band founders Robby Takac (bass/vocals/songwriter) and John Rzeznik (vocals/guitar/songwriter) plus the 10,000 fans in attendance at Key Bank Center (home of the Buffalo Sabres).

The Goo Goo Dolls have been the icons of Western New York music scene since the band’s inception in 1986. Their rise from playing in bars in Buffalo, NY to headlining major sports arenas has been interesting to watch and richly deserved. Since then, the band has sold over 15 million records and have had an incredible 19 top ten singles on various charts. They currently have over 11.5 million listeners on Spotify and their massive Grammy nominated hit “Iris” has amassed over 1 billion streams.

This performance was the last date on the Goo Goo Dolls’ “Chaos in Bloom” summer tour, which commenced on July 26th, 2022, in Salt Lake City. “Chaos in Bloom” is the band’s 14th studio release and many feel one of their best releases since 1998’s “Dizzy Up The Girl.”

The show kicked off with “Yeah, I Like You,” the first single released from “Chaos in Bloom.” From this point the crowd rose to their feet and remained standing for the next 1 hour and 45 minutes.

For the first eight songs, Rzeznik & Takac, plus touring musicians Brad Fernquist (guitar), Craig Macintyre (drums) and Jim McGorman (keyboards), just pounded one hit after another with no stopping in between for stage banter. Takac and Rzeznik were laser-focused, and razor-sharp on this evening. Rzeznik sang and sounded as good as ever, with his powerful vocals resonating throughout the arena. The audience was equally enthralled and sung along to every word.

When Takac stepped up the mic to sing lead vocals, he told the audience, “You guys have been on this journey with us for a super long time, I’m so happy that you are here with us tonight.” He then kicked in to sing fan favorite songs “Lucky Star” and “Free of Me.”

Rzeznik, who is usually a bit more verbose during shows, really didn’t address the audience until midway through the set. Before performing “Come to Me” he explained. “This is a very sticky ooey gooey love song. And I make no apologies for writing love songs.” He performed this song and the next song “Sympathy” alone on stage with his acoustic guitar.

Before “Sympathy,” Rzeznik declared, “Man, it’s been one hell of a summer, and this (show tonight) is a hell of a way to finish it. Tonight is amazing!” He then explained, “This song is about feeling sorry for yourself….and that’s a quick way to lose all of your friends”

During “Sympathy” Rzeznik forgot the words halfway through the song and stopped. He laughed it off and mentioned “A lot of people think that that I do this on purpose, but I don’t.” He added, “My brain just farted in front of all of you.” After a few attempts he figured out where he left off and finished the song.

Next up was the groundbreaking, hit “Name.” This was the song responsible for propelling the Goo Goo Dolls into superstardom back in 1995. Rzeznik and Takac haven’t looked back since. Rzeznik told the audience, “You guys were all with us before this song came out and it amazes me that I still get to come back and play for you.” He then added, “This song really changed our lives.” This turned into one of those magical concert moments that gives you goosebumps as the crowd cheered and sang back passionately.

Soon after the band performed a few new songs off their critically acclaimed recent released “Chaos in Bloom” record. Rzeznik joked, “I can’t believe that they still let us make records,” The song “War” and “Going Crazy” followed. During “Going Crazy” the confetti cannons filled the air with confetti and streamers.

Takac returned to lead vocals for “Life’s a Message” and “Bringing On the Light,” Although all the Goo Goo Dolls hits are sung by Rzeznik, Takac has some real gems that should not be overlooked in the Goo Goo Dolls catalog.

For the Grammy-nominated hit “Iris” everyone grabbed their cellphones to record this moment. The band was joined by guest Ryan Delahoussaye from Blue October (the opening band) on violin. It was another one of those magic concert moments where the audience and musicians connect as one. The stage was lit up as shower of sparks fell from the top of the stage. The performance of this timeless hit was worth the price of admission alone. Rzeznik always sings this song with so much emotion.

The band came back to play a two-song encore of “Tattered Edge / You Should Be Happy” and a rocking version of the Tom Petty classic “Runnin’ Down a Dream.” The band left the stage to a standing ovation. The house lights went on and the Buffalo Bills cheer song “Shout” was played on the house PA as the audience left the arena.

This show definitely lived up to the hype of being the concert event of the year in Western New York. It was great to have the Goo Goo Dolls perform again in the KeyBank Center. The last time they played in this arena was in 2003, when they opened for Bon Jovi. They played as a headliner here in 1996, for the arena grand opening and also headlined in 2002 on the ‘Gutterflower’ tour.

In summarizing this evening, Rzeznik said it best when he stated, “I am proud to call Buffalo my hometown! If this all ends tonight, I’ll die happy.” For many fans in attendance, some who have followed the band since 1986, the feeling was mutual.

For more on the Goo Goo Dolls, please visit www.googoodolls.com

Yeah, I Like You
Slide
Big Machine
Here Is Gone
Black Balloon
Naked
Miracle Pill
Over and Over
Lucky Star
Free of Me
Come to Me (Acoustic)
Sympathy (Acoustic)
Name
So Alive
War
Going Crazy – confetti
Life’s a Message
Bringing On the Light
Broadway
Better Days
Iris
Encore:
Tattered Edge / You Should Be Happy
Runnin’ Down a Dream

Recent interview with Robby Takac below.