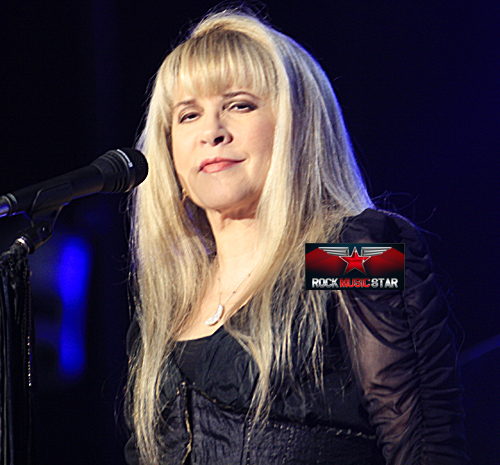 Niagara Falls, NY –  Stevie Nicks looks like she either made a deal with the devil, or has been drinking from the fountain of youth since the 80’s, as when she appeared at the Seneca Niagara Events Center this past Saturday night, she looked and sounded like she really hasn’t aged at all.  With her references of being a vampire, to claiming to have lived a past life in the 18th century, perhaps my assumptions about Nicks aren’t all that off.

The ever youthful Nicks started her show off on some what of a down note however, as the first song performed was a cover of Led Zeppelin’s “Rock and Roll,” perhaps one of the most generic, over-played songs one could imagine, and really didn’t suit Nicks’ style or voice.  To makes things worse, the sound/mix was really off, as lead guitarist Waddy Watchel’s telecaster was twangy and overbearing, muddying up the sound of the band.  After that abortion was over, things seemed to pick up as they slowed it down with “Enchanted,” originally from Stevie’s 1983 “Wild Heart” album.  After each song, the sound seemed to improve, and after playing the fan favorite “Dreams,” Nicks informed the crowd that this is not a greatest hits tour, but a continuation of her tour for her 2011 release entitled, “In Your Dreams.“  She then explained that the next song, “Moonlight (A Vampire’s Dream),” was from the aforementioned release, and was started in 1970 and finally finished it in 2009, as she was inspired by “New Moon” (Twilight) film.  She then explained that finishing that particular song was the motivation for her to record a brand new record.

After the song, Nicks left the stage and the band proceeded into the Fleetwood Mac classic, “Goldust Woman.”  Nicks returned to the stage wearing a new dress, as this intense, extended version included some guitar/vocal trade offs between Nicks and Watchel, which was rather captivating.  In an unexpected move, she brought out her vocal coach, Steve Real, to sing on the classic Nicks/Don Henley song called “Leather & Lace.”  Afterwards, she talked about how she wrote a song 200 years ago with Edgar Allen Poe, and how it became the song “Annabel Lee.”  After explaining how the next song, “Landslide,” was written when she “decided to stay in and watch the snow” in a Colorado cabin, as the song played, they showed old pictures of her and her family on the big picture screen behind the band.

Although the audience enjoyed the new songs, it was the old classics that brought the crowd to it’s feet.  And while the diehard Stevie Nicks fans may have enjoyed the “Storyteller” type setting, where Nicks was very verbose in giving detailed explanations on the background of how each song was written, the casual fan would have preferred more songs and less talking.

After performing the song, “Ghosts Are Gone,” Nicks left the stage and returned for a two song encore that started with “Edge of Seventeen.”  During this song, audience members up front handed Nicks bouquets of flowers.  Nicks thanked the audience for allowing her to move into the future by embracing her new material.  She then declared, “You are Awesome.”  For the final song, “Love Is,” Nicks stated that she writes songs so her fans can have them and interpret them anyway they want.  And while maybe the fans didn’t get everything they wanted out of her 2 hour plus set, perhaps Stevie will return in her next life to mesmerize the audience once again.