Darien , NY – The multi-platinum selling band from Buffalo, NY – The Goo Goo Dolls- are the one consistent entity that the citizens of the Western New York area can celebrate, enjoy, and be proud of year after year.  Every time the band performs in WNY, it turns out to be a party-like celebration of their amazing, two-decade long domination of the AOR play charts.  This particular show of their, “Long Way Home,” summer tour was no exception, and dare I say, the Goo Goo Dolls took their usually flawless performance to another level. 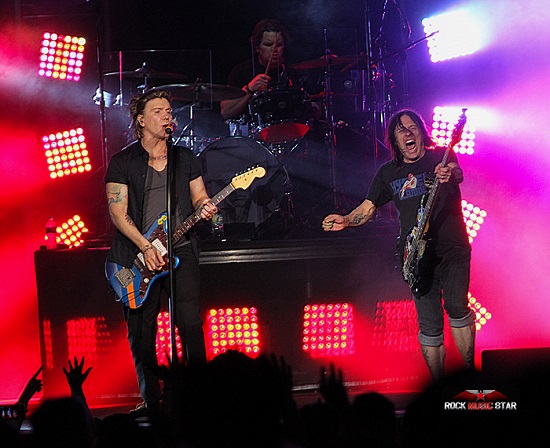 The Goo Goo Dolls, duo of John Rzeznik- vocals/guitar, and Robby Takac- bass/vocals, along with touring musicians: Brad Fernquist -guitar, Korel Tunador -keyboards/ guitar, and Craig Macintyre – drums,  seemed just as excited as the audience to be returning home. They performed to an enthusiastic crowd of 11,000 fans ranging in all ages.  Their 22-song setlist was a good mix of the mandatory classic hits, plus two tracks from their new EP, ‘You Should Be Happy,’ and five tracks from their 2016 full-length release, ‘Boxes.’

Rzeznik and Takac had a few special surprises for this special show.  For the song,  “We Are the Normal,” they brought up Mary Ramsey from the 10,000 Maniacs to perform viola.  Ramsey performed on the original studio track, which appeared on the 1994 release, ‘Superstar Carwash.’

Rzeznik explained prior to their 1995, breakout hit, “Name,” that the band was just about to call it a day and go off into obscurity, when the song broke out, receiving massive airplay and become a number one hit.  “From the bottom of my heart, thank you for believing in us all these years,” stated Rzeznik.  Then he declared, “This is your song!”  The crowd roared back in approval and delight.

A stunning and rocking version of the hit single, “Broadway,” featured a saxophone solo from the multi-instrumentalist, Korel Tunador.  In addition, Rzeznik added an impressive, Springsteen-like, harmonica solo.

The highlight of the evening was a memorizing, emotional and powerful performance of the HUGE hit #1 single of the 90s, “Iris.”  And just like prior concerts, the crowd passionately sang back every word to Rzeznik.

The Goo Goo Dolls then ended the set with a song that should have been released as a single, “Boxes.”  This track, along with all the newer material, really translated well live.  Blasts from the confetti canon filled the amphitheater as Rzeznik, and the always energetic Takac performed the last notes of another spectacular and memorable Goo Goo Dolls homecoming show.