Buffalo, NY – Last week, All Hallows Eve had an extended stay in Western New York, as one of the most fiendish concert billings you could draw up on paper performed for a large gathering of metal heads, at the one and only, Town Ballroom, in downtown Buffalo.  It’s hard to imagine a better lineup than Gwar, Doyle, the US Bastards, and a group that call themselves “Ghoul,” to perform on the day after Halloween.  While the near sell out crowd may disagree with me, but while this bill may have looked great on paper, the actual show itself left a lot to be desired.

While interviewing the one and only, Doyle Wolfgang von Frankenstein, prior to entering the venue (as the show had already started), we did not get the opportunity to see the US Bastards perform – which was a shame considering the band is fronted by Gwar’s very own lead guitarist, Brent Purgason.  However, after entering the building and receiving our credentials, we made it inside – just in time to see ‘Doyle’ begin their set.  Unfortunately Doyle’s set was mired by sound issues, as walking into the concert area – where the band had just started performing – could only be comparable to hearing a garage band jam, banging out their tunes, having no true sense of how they really sounded to their audience. 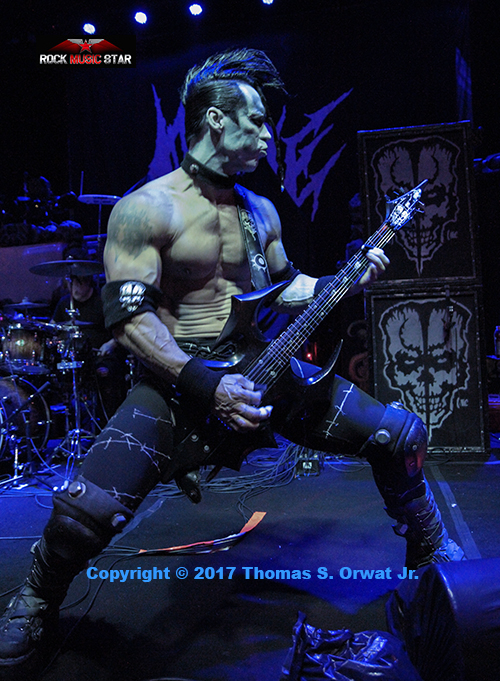 Doyle’s live guitar sound was thin and twangy and Alex Story’s vocals were barely audible at times.  However, performance wise, enough cannot be said about drummer Brandon Pertzborn.  Pertzborn’s off-time and syncopated drum beats were the perfect compliment to Doyle’s simplistic, yet effective, doom laden guitar riffs, which again, unfortunately did not shine in the same way they do on his most recent studio recording, ‘As we Die.’  While there were some rumblings in the audience regarding the fact that Doyle’s 7 song set did not feature any Misfits material (the band that he and his brother Jerry Only have been carrying the visual tradition for since the classic lineup – featuring Only, Doyle and Glenn Danzig broke up in 1983), one can only wonder if Doyle is simply biding his time, performing club gigs, third on the bill to Gwar, when in only a matter a months, he will be playing sold out arenas with a reunited Misfits lineup.

Next up were the band Ghoul. Ghoul is supposedly a group of mutants from Creepsylvania that were tricked into signing a record deal with Razorback Records.  The characters that make up the group are Cremator, Digestor, Dissector, and Fermentor, with various other characters periodically joining them onstage.

Though the identity of the band members is meant to be secret (they use alias’s and wear burlap/potato sacks over their heads when performing live), it is known that some of the members also perform in the band, Impaled.  While it was no secret that the band’s thematic set is heavily influenced by Gwar, truthfully they did nothing for me.  Other than preparing the the fans for the serious soaking they would be receiving from Gwar (they also include additional “characters” in their stage show that also squirt fake blood), to me, they came across a simply a slot filler, that could have easily been billed as “Gwar Jr.”

Before getting to the Gwar portion of my review, I must reiterate that I am, and have been, a HUGE Gwar fan for many years.  If you’ve read any of my previous CD or concert reviews or checked out any of the interviews I conducted with Oderus Urungus/Dave Brockie, you’ll know that I’m not just some guy who doesn’t ‘get’ Gwar. With this concert being the third time I’ve seen Gwar perform since Brockie passed away in 2014, I can safely say that this was the worst Gwar concert I have ever seen.  While all surviving members of the band still put on a great performance, I can simply not get past the subpar replacement that they chosen for Brockie, with Mike Bishop fronting the band as “Blothar the Beserker.”

When Gwar originally announced their plans to continue after Brockie’s demise, it appeared as though that they would be using multiple members/characters sharing the lead vocals, which seemed much more palatable, considering what a huge loss Brockie is to the band, from a visual and musical standpoint.

With the band making an uncharacteristically late start at 10:30pm, they started the show with the opening track of their new CD, ‘Blood of Gods.’  The song set the tone for the rest of evening, as their set was primarily comprised of all songs from the new record, with only a couple of fan favorites like “Hail, Genocide!” and “Saddam a Go-Go” thrown in here and there.  Between Bishop’s one dimensional voice, lack of charisma and stage presence and the fact that most of the new songs from ‘Blood of Gods’ are just piss poor, there was very little I could enjoy from this performance.  Even the new mascot they created for the song “Death to Dickie Duncan” was completely lame, as it looked like a cross between McDonald’s Grimace and the facebook “poop” emoji.

With Gwar’s style now being more a mainstream hard rock sound, versus the amazing over the top metal they’ve been putting out on their last few albums, I can understand when fans make comments like “Gwar sounds like an AC/DC tribute band now.”  It’s really sad to see them fall so far from greatness, although I did enjoy 2 of the new tracks, “El Presidente” and “The Sordid Soliloquy of Sawborg Destructo” from ‘Blood of Gods.’  Perhaps there’s a shimmering of hope that all is not lost.

With long time guitarist Mike Derks (aka Balsac the Jaws of Death) fighting a serious bone marrow disease and doing what he loves the most, by continuing with the band until he can receive a bone marrow transplant, I hope for Derks and the rest of band, and their fans, that they can figure out some way to right the ship, and keep the legitimacy of everything they’ve fought for the past 30+ years, otherwise “the Master” should just send them back to Antarctica, to freeze them once more, in order to prevent them from tarnishing the legacy of this once great band.