Darien, NY – When following any heritage act which has tenure of 40+ years, you’ll be hard pressed to find one that features all of its original members. Essentially, what it seems to come down to, is how the band’s diehard fans and casual music fans alike, accept the transitions within the groups, and how accepting they are of replacement members who have taken the place of their predecessor.

At Wednesday night’s concert at Darien Lake’s Performing Arts Center, both “co-headlining” acts, Judas Priest and Deep Purple are not “Perfect Strangers” to the customary ‘revolving door’ with it’s band members and subsequent lineup changes. With the combined tally of replacement members totaling almost 20 people in all, one thing the bands seem to share in common, is the fact that both of them still feature their most popular lead vocalists, Rob Halford and Ian Gillan (neither of which, despite popular belief, are the original front men for either group), which may be the key to the groups’ continued success – both being right around 50 years in the music industry.

For Judas Priest, their most recent replacement was with lead guitarist Glenn Tipton. As Tipton, who was diagnosed with Parkinson’s Disease, while still an “official” member of the band, has only maintained a limited role with their current live setting, making select appearances for encores, playing the less technical songs that he can pull off on guitar, while battling the horrific effects of his debilitating disease. While the band is contemplating finding a permanent replacement for Tipton, currently, filling in for Glenn, is producer Andy Sneap. While Sneap produced the band’s most recent CD, the well received, ‘Firepower,’ I can’t see fans being satisfied with Sneap onstage with the “Metal Gods.” Although I understand the argument that Sneap was pivotal in producing the band’s latest album and really knows the new material, I surely wouldn’t want to see Bob Ezrin playing guitar onstage with KISS or Alice Cooper. When Sneap made his initial appearances onstage with Priest earlier in 2018, they chose not to dress him in the trademark metal & studs attire, and after seeing him perform with band on Wednesday, it was interesting to see that they changed their approach, as they now had him dressing the part. Although Sneap was “Hell Bent for Leather,” musically and performance-wise, he just doesn’t seem like the right fit. Unlike Priest’s previous replacement member, Richie Faulkner (who replaced guitarist K.K. Downing, after he retired from the band in 2011), Sneap lacks the guitar chops and the stage presence Faulkner has, which left Faulkner playing most of the Tipton and Downing signature lead guitar parts. It was noticeable that Sneap was completely out of sync with the band, every time he, Faulker and bassist Ian Hill, did their choreographed guitar hero moves.

However, for most of the fans in attendance, the fact that band’s prestigious guitar duo was now two nameless/faceless guys dressed in leather didn’t seem to matter much. The crowd clearly got off on the fact that singer Rob Halford is still fronting the band (Halford replaced original vocalist Al Atkins in 1972, and aside from an 12 year absence between 1991-2003, has been with the band ever since), and still has the amazing voice he is known for.

Priest, as a whole, sounded great, and the cool ‘on screen’ conceptual video footage – mixed with a great light show – made up for the fact that most of the actual stage looked like it was painted cardboard. Most of the approximate 6,000 fans in attendance were clearly there for Judas Priest, as when they showed the crowd on the video screens during both band’s sets, although it was mostly the same people on the screen (droves of fans left after Priest performed), it was like you saw images of 2 entirely different concerts. During Priest, the crowd looked like an older version of the fans you would’ve seen in the “Heavy Metal Parking Lot” movie, and during Deep Purple, the crowd looked a bunch of shoppers at a ‘Black Friday’ sale being told they just sold out of the big screen TV’s.

Deep Purple, whose current lineup is referred to as Mk. VIII, is still highly regarded by their fan base, mostly due to the fact that the current incarnation has been together for over 15 years, leaving drummer, Ian Paice, as the only original Deep Purple member still in the band. Even though there is a portion of Deep Purple fans who will not have anything to do with the band without legendary guitarist Ritchie Blackmore in the fold, guitarist Steve Morse has been with the band since 1994, and is an incredible guitar player, and fits the band perfectly.

Many people, myself included, felt that Deep Purple should’ve opened the show, as this more progressive sounding version of the band, came across like a huge buzz kill after witnessing a great set by Judas Priest. Although Deep Purple’s sound was more even and less shrill on the ears, Don Airey’s keyboards drowned out Morse’s guitar at many key points in the night and I think 2 keyboard solos is 2 too many, for any rock and roll concert. And as musically contrasting as the two bands are, visually it was even more night and day.

While many of the members of lineups of Judas Priest and Deep Purple are similar in age, the members of Deep Purple certainly LOOKED their age and dressed as pedestrian as any rock performer could be. With most of Deep Purple looking like senior citizen Walmart greeters just missing a name tag, it really had me scratching my head, as to why Deep Purple were contracted to close the show.

Either way, fans who came to see Deep Purple or Judas Priest certainly came away with what they were looking for, as Wednesday’s concert marked an end to Darien Lake’s summer concert series for hard rock. Until next year Darien Lake……Rock on!!

Thank you to the incredible staff at Chipster Pr for providing us with press credentials. 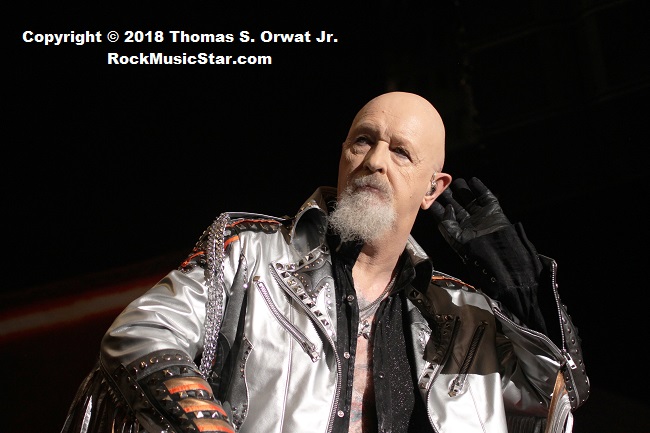