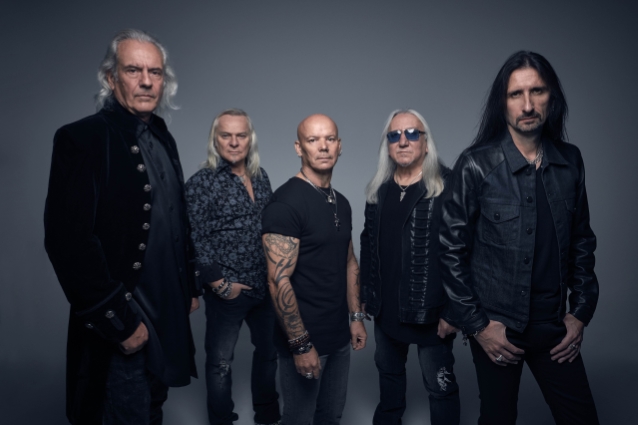 British classic-rock band, Uriah Heep, will be releasing a new studio album, ‘Living The Dream’ on September 14, 2018. This will be the band’s 25th release, since their inception in 1969.

‘Living The Dream’ contains standout tracks such as: “Grazed By Heaven,” “Rocks In The Road” and the title track, “Living The Dream.” This truly is some of the band’s best material in their 50 year career, and will appeal to faithful followers of Uriah Heep or any classic rock music fan.

What follows is an exclusive RMS interview with Uriah Heep bassist – Davey Rimmer. During this discussion, Rimmer talks about the new record, tour plans, how he become a member of the band and much more.

RockMusicStar : Hey Davey, let’s start off by discussing the new Uriah Heep record, ‘Living the Dream.’ It’s really an impressive, classic rock sounding release.  What was the process behind writing and recording this record? 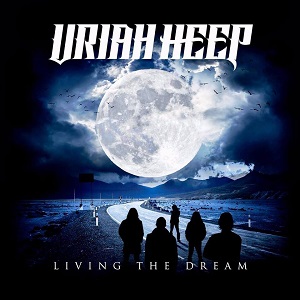 Davey Rimmer: We are always touring, and a very busy band.  As we were touring, we have been compiling new material.  We got to go into the studio last January, in Wiltshire England. It’s like in the middle of nowhere, on a farm in a converted chapel, it’s a really cool studio. Jay Ruston produced the album. We did a song per day for two weeks. We drank a lot of wine! (laughs) It was a really great experience. It’s also really great that the album has seemed to connect with a lot of people. Many of  the Heep fans really seem to like it.

RMS: You have been in Uriah Heep since 2013. What was the most challenging aspect of joining such an established and well-respected band?

DR:  It was a bit daunting at first, because I’m a fan of the band. I really liked Trevor Bolder, and the other great bass players that have played in Heep over the years. I was always into classic rock when I was growing up. But, it was such an honor for me to be asked to do it, so I thought I have to do it. The band was very nice, cool and all very supportive. They encouraged me to do my best, and be myself. The fans have also been really great to me as well.  But, it’s been a great experience, it’s like living the dream! (laughs)

RMS: Was there any type of audition process that you had to go through before joining the band?

DR: Yes, I had to audition.  I had to play through the set, which was quite nerve wrecking. But, that was really it, I played through the set, and then they said that they would see me in a few weeks in Holland. I knew Russell Gilbrook, the drummer, I performed with him a couple of times before. So, at least I knew him, but I didn’t know the other guys. But, they made it as comfortable as possible for me, and for me, to play with Mick Box and the boys, it was a dream come true.

At the time, I was just filling in for Trevor Bolder, because he was in the hospital. I was just going to fill in until he came back. But unfortunately, and sadly, Trevor passed away (May 21, 2013), and I ended up staying in the band.

RMS: That must have been a very bittersweet moment for you.

DR: Yes. I had never met Trevor. During that time, he was always in the hospital.  But, I was really looking forward to meeting him. But, unfortunately I never did get to meet him.  He was a fantastic player, and a lovely guy as well.

RMS: Getting back to the new record, ‘Living the Dream,’ there are some really outstanding tracks. The one in particular, that really has all the elements of classic Uriah Heep, is the 8 minute plus long track “Rocks In The Road.” What was the process behind that track?

DR: Mick and Phil had a basic demo with the title. And then, we just went in there, and jammed it out. For this album, we wanted to do some more progressive tracks. With our last album, ‘Outsider,’ we didn’t really get to rehearse or  work on the songs that much, we just went straight into the studio, and just a small window of time to record it.  And we did it, and it’s a great album. But this time around, we wanted to put in more of the classic elements,  and the hard rock edge.  We wanted it a bit more proggy, and with more acoustic guitars and piano.  So this time, we really tried to made an effort to appeal to some of the fans that liked more of our material from the 70’s, 80’s. So, we just tried to do a cross-section of all our different styles.

For “Rocks In The Road,” we just put the parts together and jammed it out.  It was good in the studio, because it was a residential studio, and we could play whenever we wanted.  But, that one came out good, it’s got all the elements of classic Heep.  It’s got a rockin’ section and a quite section. But, we have had some really positive comments about that song.

RMS: With Uriah Heep having such a long history, with so many classic, must play songs, it must be challenging coming up with a set list.  For your upcoming tour, how many tracks from ‘Living the Dream,’ will you try to include?

DR: We start rehearsing in a couple of weeks.  We are going to rehearse again about 6 or 7 of the songs and have them ready to be performed. “Living The Dream,” the title track will definitely be in there, and probably “Take Away My Soul,” and “Grazed By Heaven.”  But, we are just trying to see what ones fit in well with our older and classic material. It is hard because it’s 25 albums and 50 years of music, so it’s difficult to keep everyone happy.

RMS: I’m one of the few that really enjoys hearing newer material performed.  Especially with a record like, “Living The Dream.” I really think so many of those songs would come across great live. So, I hoping you will play more than just one or two.

DR: Yes, we will do more than 2, for certain. I would say at least 4 songs. If you remember, in 2008 Heep played their entire new album,”Wake the Sleeper.” I remember that tour. But, we probably won’t do that, but the reaction to the record has been good, with great reviews, so we will play as many as possible. We would love to play longer sets, but many times we are limited to the amount time we can play. Normally, we play for about 90 minutes, but we would play longer if have the opportunity.

RMS: I have a great deal of respect to Uriah Heep for continuing to make, great new music.  the band could easily just go through the motions, and rest on its past, and play the same set list of fan favorites night after night. Uriah Heep still seems hungry to impress.

DR:  Being around Mick, Phil, Bernie and Russell you can see that they don’t want to rest on their laurels. They always want to go forward, and write new songs. Yes, we could just do the nostalgia tours. A lot of bands do that. But, that’s never been the Heep mentality.  Since, I’ve been in the band, for 6 years now, it’s always been about creating new music. We have all the classic tracks, which is great, and it’s a great catalog, but to them, you can always improve on it. We want to write songs that Heep fans will be proud of.  When we play, we want to have energy, and power with new songs.

RMS: What are the plans to promote, ‘Living The Dream,’ in North America?

DR:  We did a big tour of North America, earlier this year. It went so well, it was actually the best tour that we’ve ever done in North America. So, we hope to come back in 2019. Also, we now have US management, which has bumped us up 100%.

RMS:  I would love to see Uriah Heep on a package tour with the likes of a band such as: Whitesnake, Judas Priest or Deep Purple.

DR:  We have been trying to do just that.  We actually did a date with Judas Priest a few weeks ago in Germany, it was fantastic! But, if we can, we would love to get on a package tour for North America. If we can’t, we will just do it alone. That’s what we did last time, and it was great.

RMS:  Do you personally consider the ‘Living The Dream,’ record to be the highlight of your career, thus far?

DR: Yep, for me certainly. Just like the album title, I certainly am living the dream.  One of my songs is on the album as well, “Grazed By Heaven.”

RMS: Oh, you wrote that track?

DR: Yes, that song was written by me and Jeff Scott Soto. To get that song on the album was a really exciting moment for me. This was definitely the best album that I’ve ever played on. And also working with Jay Ruston, the producer, it was great working with him. It was such a great experience, to wake up every morning, and play a new song every day, then have some wine and play pool. It was like going back in time and being in a classic 70’s rock band, which it is. (laughs) It was definitely the best experience that I’ve ever had making an album.

RMS: Who were some of your influences when you started playing the bass?

DR: Early on, when I was a kid, it was John Deacon (Queen), that was the band that really made me want to get involved with music. I still love Queen. Then later on, I started to get into Deep Purple, Uriah Heep, Ozzy, and Van Halen.  I started really getting into the whole rock music thing. John Entwhistle (The Who) and Billy Sheehan were big influences too.  Trevor Bolden, also, before Uriah Heep, he was in Bowie’s Spiders from Mars. His bass playing is so powerful, yet melodic. Bob Daisley, he was also in Uriah Heep for some time, as well. But, I’m a big rock music fan, and still a big fan of bass players.

RMS: Last question, Davey. What else would you like to accomplish in your career?

DR:  Well, I think that I sort of accomplished that, which is playing music for a living. That’s what I do now with being a member of Uriah Heep.  We are pretty much on tour for the entire year. When we are not on tour, we are making albums. For me, that’s all that I ever wanted to do. I’ve played all over the world, and played some fantastic gigs with Heap, so again, I’m definitely already living the dream!