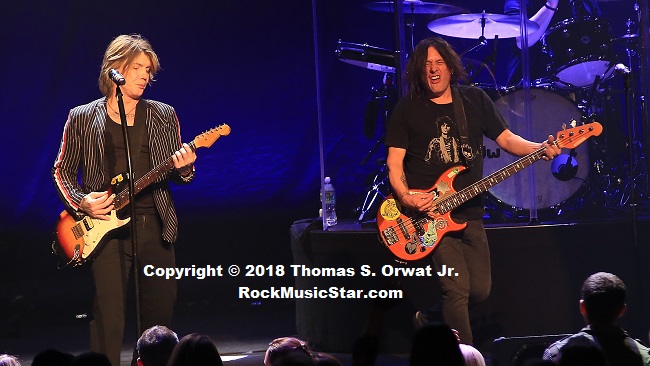 Buffalo, NY – The multi-platinum music kings of Buffalo, NY, the Goo Goo Dolls returned home to perform their first night of three consecutive sold-out shows on their ‘Dizzy Up The Girl’ 20th Anniversary’ tour. (When the band originally toured for this release, they had also played three sold-out dates at Shea’s in December of 1999.) These three shows are being filmed for a future feature. 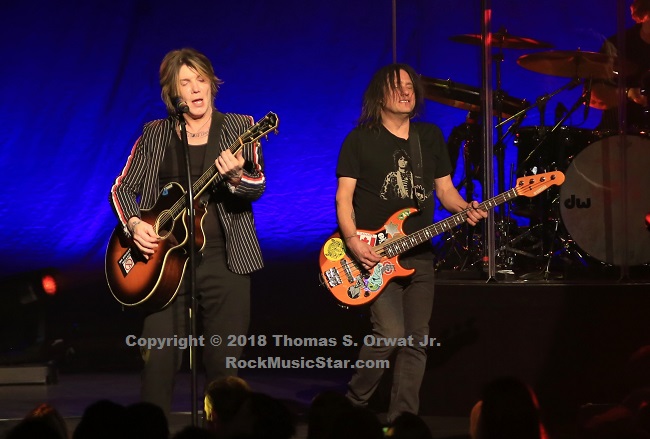 This highly anticipated performance certainly lived up to the hype, and was extra special because it was in a much more intimate venue – Shea’s Performing Arts Center, which has a capacity about 3000, as opposed to were the band usually plays – Darien Lake PAC, with capacity of 21,000.

The Goo Goo Dolls hit the stage at 8:30 pm, 30 minutes late. The audience was getting a bit restless, but when the house lights went down, and the band kicked into the first track, “Dizzy” the audience put down their phones and stood up from their seats, and for the next 2 hours remained standing and cheering on their hometown heroes.

Band members John Rzeznik (guitar/vocals) and Robby Takac (bass/vocals), along with hired guns Brad Fernquist (guitar), Craig Macintyre -(drums) and new member Jim McGorman (keyboards), were focused, energetic, and musically brilliant throughout their set, which consisted of the entire ‘Dizzy up The Girl’ release, plus a second set of hits mixed with many rarely played fan favorites.

With the first half of the show dedicated to ‘Dizzy Up The Girl,’  which was released on September 22, 1998, sold over 4 million, and consisted of 5 chart singles, you could really sense that most people in the audience were familiar with not only the hits, but the seldom played songs from that release as well. 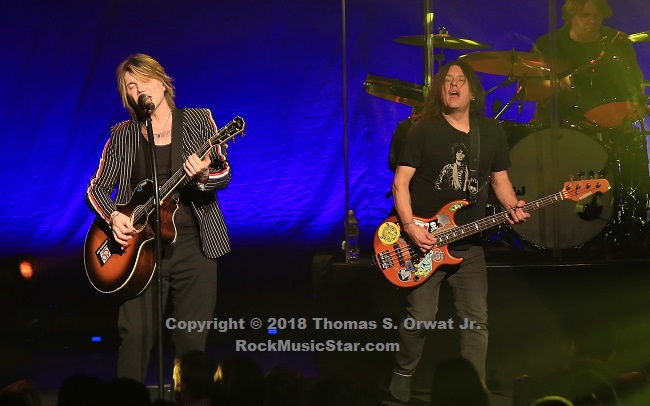 Watching the band perform the entire ‘Dizzy Up The Girl’ record live gave a new appreciation to the brilliance of the well crafted songs and profound lyrics.  The first track, “Dizzy” followed up by the radio smashes “Slide” and “Broadway” sent the audience, which consisted of fans from young to old, into a near frenzy.

Goo Goo Doll’s songwriting genius, John Rzeznik, is a true perfectionist and was especially intense during this evening.  Although, he seemed a bit irritated by some issues he had with the monitor mix and a missed cue by one of the hired guns, Rzeznik didn’t smile that much, at least during the first half of the show, but delivered an unforgettable and passionate performance both vocally and musically.

While Rzeznik played the role of the focused leader, Takac was the more jovial one, bouncing and running around the stage with his animated facial expressions, playing and singing his heart out. His raspy voice is the perfect complement to Rzeznik’s smooth vocals, and his songs, while not the huge hits, are an integral part of the magic of the Goo Goo Dolls live.

During the performance of “Black Balloon,” a four piece orchestra was set up on stage. This song is always a highlight of the Goo’s performance and really brings to attention the great mix of Rzeznik’s and Takac’s vocals on the chorus.

One of the many highlights of the evening, was the emotional performance of “Iris.” With the four piece orchestra returning to the stage, Rzeznik tore thought this emotional hit, having the crowd sing along to the chorus. It was one of the concert moments that gave you goose bumps as the crowd gave a rousing standing ovation afterwards.

Before the song, “Acoustic #3,” Rzeznik explained, “This song is about my mother and how she stayed in a fucked up relationship due to her love of her children.” He also explained that he never finished writing the song, and maybe some day will write a fitting ending.

When the band finished performing the first half of the show, the large framed photo of the “Dizzy Up the Girl” album was removed from the backdrop and a vertical video screen that closely resembled an iPhone was wheeled on stage.  Then began what was truly a very innovative and creative concert moment.

On the video screen was a previous filmed video of Rzeznik, who Rzeznik introduced to the audience as his friend, “John.”  Rzeznik interacted with and performed with his digital self, while the band left the stage.  The first three songs of the second set, which were “Better Days,” “Can’t Let It Go,” and “Two Days in February,” were performed this way.  It was really creative and well done. The audience was in awe, and it showed Rzeznik’s self deprecating sense of humor.  Takac joined Rzeznik and digital John for the middle part of  “Two Days in February,” and then digital John finished up the song.

The rest of the band returned to the stage and continued the second set , which was filled with some hits and  great older material, including 4 from the ‘Superstar Carwash’ era of 1993.  It was refreshing hearing many of these again for the first time in years.

Before the song that changed Rzeznik and Takac’s lives forever, “Name,” Rzeznik explained how when he wrote it, he was down and praying to the universe for a hit.  He said, “I was rapidly approaching my 30’s and I was sitting on a dirty old sofa on a dirty old carpet in a dirty attic on Norwood Ave.” He added, “I was just praying for a hit, so I could get out of this shithole.” A stunning performance of “Name” followed with the audience singing back every word.

Shortly after, the band played the beautiful and heartbreaking song that should have been a huge single, “Notbroken,” (from the 2009 release, ‘Something For The Rest Of Us’). Rzeznik told the audience, “This record was released at a weird time.” He added, “The record company didn’t want to promote this and said no one wanted to listen to us.” He concluded by declaring, “Well, that record company guy is gone and I’m still here.”

The evening ended with a rockin’ two song encore of “Big Machine” and “Flat Top.” When the final note was played, is was very clear that a musically historic event had just taken place in Buffalo, NY. 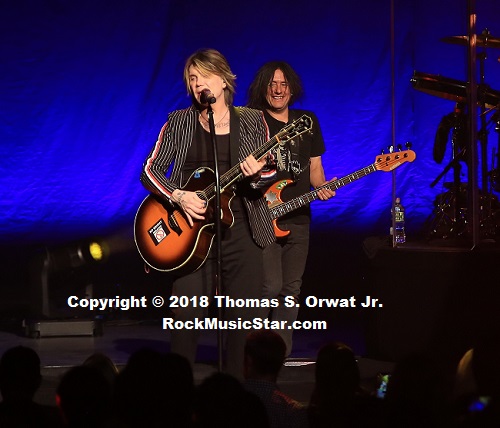 The Goo Goo Dolls have come a long way since they formed in 1986. It took 9 years before they had their first hit with “Name,” and during that time they came very close to breaking up many times. But, like the great people of Buffalo, Rzeznik and Takac are extremely resilient, and it’s paid off.  They have remained relevant and are one of the most accomplished and important bands of the last 25 years.

This tour, and especially the three show hometown weekend, is a great victory lap for the band, to celebrate all that they have accomplished over the years.  But, by no means think that Rzeznik and Takac are going to slow down. The best is yet to come!

For more on the Goo Goo Dolls, please visit www.googoodolls.com