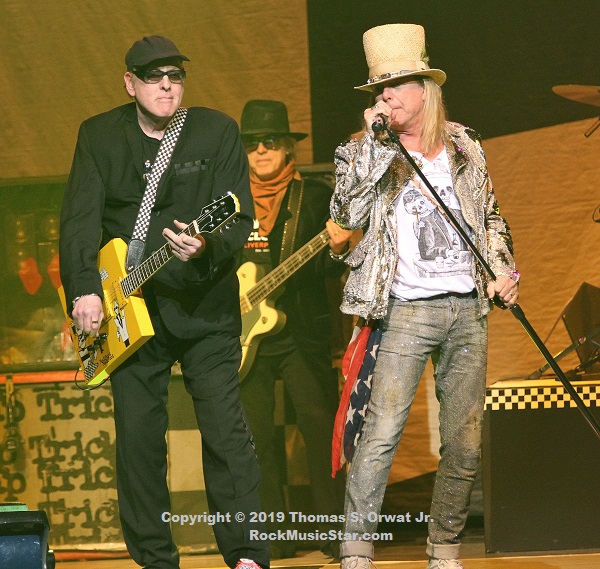 After the intro, “Ladies and Gentleman, Boys and Girls, please welcome to the stage the best fucking rock band that you have ever seen…Cheap Trick!” the band hit the stage promptly at 9 pm.  Certainly there was no denying this declaration, especially on this evening.

Starting with their usual opener, “Hello There,” the band looked happy, focused and determined to rock! The audience was a good cross section of die-hard fans and high roller casino patrons.  According to the casino staff, this show sold out in less than 20 minutes, when tickets when on sale a few months back.

This was Cheap Trick’s first headlining performance in the area in several years. The set-list on this evening was exceptional , and with the exception of one song, consisted of material from only their 70’s and 80’s releases.

Shortly into the set, vocalist/rhythm guitarist Robin Zander awed the audience with a mesmerizing performance of “Need Your Love.” Zander was flawless, his vocals were passionate, and this song gave him a rare opportunity to show off his guitar skills.

For the next song, guitarist Rick Nielsen, age 70, explained that the band recently came back from performing in England, at the infamous club that The Beatles performed at during the early 60’s, The Cavern Club in Liverpool.  Both Petersson and Robin Taylor Zander (Robin Zander’s son) showed off their Cavern Club t-shirts that they were wearing on stage. The band then proceed to perform the Beatles cover, “Magical Mystery Tour.”

Nielsen was his usual animated and engaging self. It is hard to keep your eyes off Nielsen.  He is truly a one of a kind guitarist and performer.

12-string bassist Tom Petersson had his chance to shine when he played an impressive, thunderous bass solo before taking lead vocal for the Lou Reed cover, “Waitin’ for the Man.”

For the final two songs of the evening, “Surrender,” and “Goodnight,” Cheap Trick was joined by special guest, Andy Babiuk on guitar. Babiuk was a founding member of the Rochester, NY garage band The Chesterfield Kings and currently bassist of the super group, The Empty Hearts.

Set list – Niagara Falls, Canada – 1/18/19
Hello There
Big Eyes
California Man
On Top of the World
Need Your Love
Magical Mystery Tour
Ain’t That A Shame
Don’t Be Cruel
Baby Loves to Rock
Waitin’ for the Man
Voices
I Want You to Want Me
Dream Police
Never Had A Lot to Lose
Surrender
Goodnight

To see the great line-up of upcoming concerts at the Fallsview Casino in Niagara Falls, ONT. Please visit http://www.fallsviewcasinoresort.com