Corfu, NY – Writing an unbiased review about, potentially, the last time seeing your all-time favorite band in concert, is a very daunting task. But how could I not? Seeing KISS for the 51st time, within a 40 year time span, and knowing it could be the very last time I see them, is something that’s so awesome, but at the same time, kinda hard to wrap my head around. 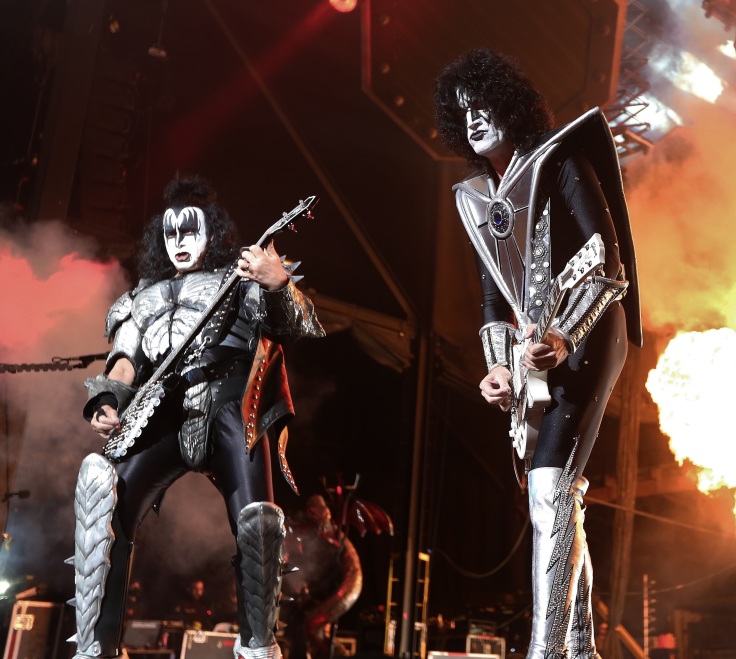 Attending the concert with my girlfriend and our grandson, and the guys in my KISS tribute band (KISS THIS!), along with the 12,000 other fans at Darien Lake on Friday, it was evident as to how much of an impact that this band from New York City has made – not just on Western New York – but the world! 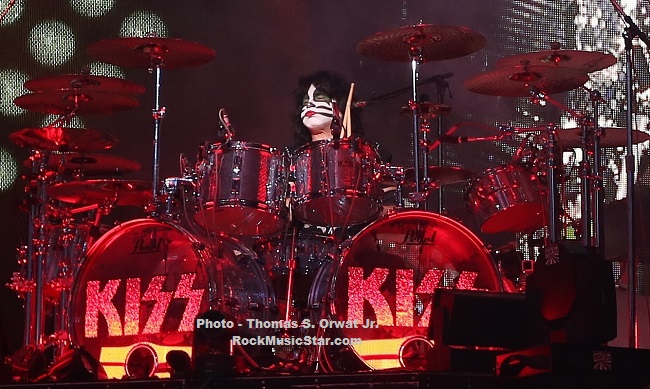 In every city that KISS performs in, thousands of people, two to three generations deep (fans range from 4-74 according to Catman Eric Singer), come from all of the world to see these four guys in makeup play gut-level rock and roll, while putting on the coolest show I’ve ever seen done by any band. Sure, you’ll have people that say, “Well, Alice Cooper was first” or someone might say “Rammstein’s show is bigger,” but there’s just something about the way that KISS delivers that no one can match. And I’ve been to TONS of concerts and I’ve seen just about any band that you can think of, and everything just seems to pale in comparison to KISS.

Friday night’s show at Darien Lake is actually the second time that I’ve seen this tour. I first saw the tour early on (back in March in Toronto), during the initial arena leg, and the show at Darien Lake is actually part of the band’s second run in North America, as they did 26 shows over in Europe between May and July. Some fans were skeptical that the “summer shed” tour would be scaled down in comparison to the arena shows, and I have to say that I think seeing the show outdoors was even better than seeing them in the arena. While they did have to eliminate the extending arms
that took bassist Gene Simmons and lead guitarist Tommy Thayer over the crowd during the finale, the rest of the show was just as big and bombastic. The outdoor atmosphere also seem to give the show more energy, as indoors, it seem a tad bit sterile by comparison. 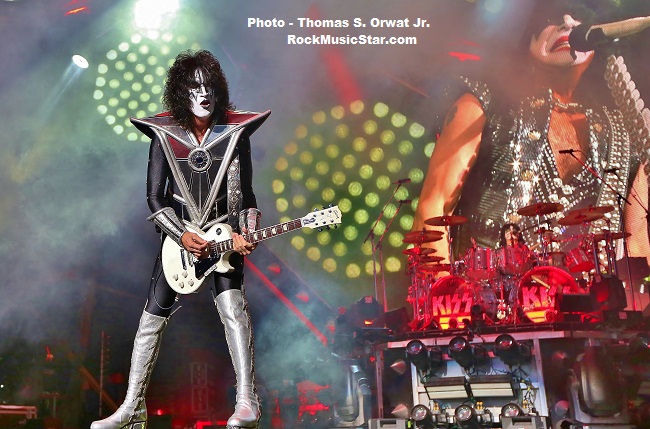 Starting the show with the ultimate opener, “Detroit Rock City,” the band descended from the top of the stage on individual, octagon shaped, lighting pods, amid the most amount of pyrotechnics I’ve ever seen at the beginning of a KISS show, ever. Simply amazing! As the smoke cleared by the end of the first verse of the song, the crowd got to see a clear view of the “End of the Road” stage. A futuristic/space-age looking stage, with a very modern look, showing the KISS Army a true, 21st century version of what a KISS stage looks like. 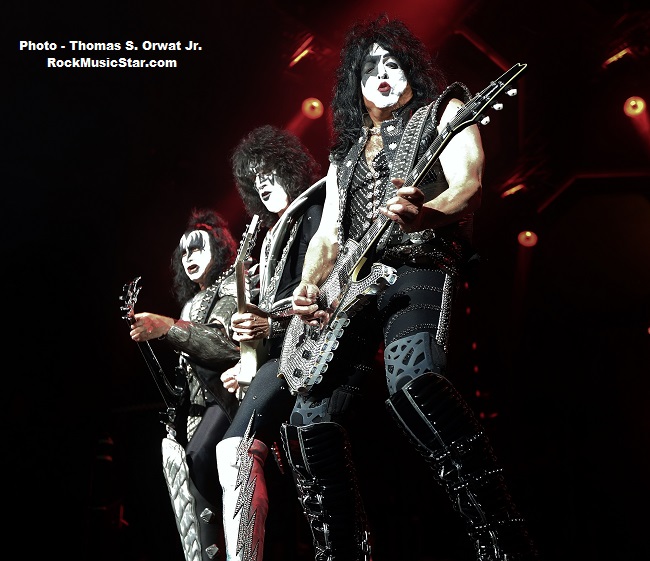 While many diehard KISS fans constantly want the band to hark back to some form of the ‘Love Gun/Alive II’ stage, ever since the bands’ 2009, ‘Sonic Boom’ tour, the group have been implementing newer technology and trying to give the over all look of the stage an overhaul.

KISS leader Paul Stanley stated that despite what they have done recently, that “on this tour, more than ever” he felt they “needed to make a statement once again.” Stanley stated the “EOTR” stage design was “brand new from the ground up.” And although it was important to the band to doing something fresh, it still had to be KISS. As Paul explained, “there are people out there doing shows that are terrific, but most are generic.” He continued, “you could put any performer on any of those stages and it would work.” Expounding, “this stage is purely our stage. It incorporates so much state-of-the-art lighting, pyro, and hydraulic lifts. It really is the ultimate KISS show. The automation and synchronization of computer technology has opened up doors that weren’t there before. And yet, we haven’t succumbed to technology. It’s allowed us to be that much more of what we are.” 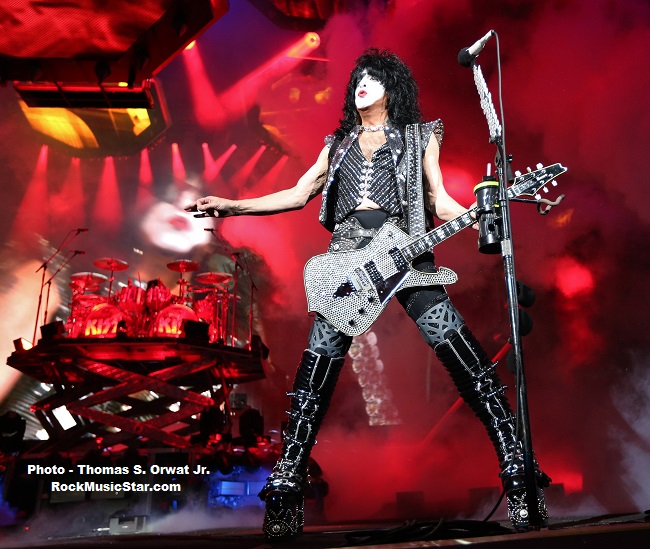 With the band using computerized technology for lightning and pyrotechnics, this has called upon drummer Eric Singer to do something he has never done live before with KISS, and that is to play live to a click-track. The click-track ensures the tempo runs exact from night to night, providing continuity for all of the lighting and pyro cues, guaranteeing dead on accuracy for each spot throughout the night. While some might think it would make it nightmarish chore to have to play along to a click every night, but Eric, being the amazing pro drummer he is, seems to fun playing along to it, and even challenges himself to stay in time by adding in some “off” or “odd timed” drum fills in songs like “War Machine” and “Psycho Circus” without missing a beat. 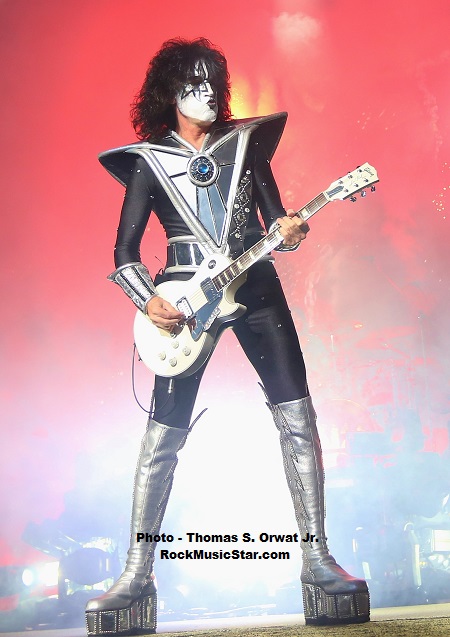 The new stage design really lends itself with the solo spots for Gene Simmons and Tommy Thayer. For Gene’s blood spitting routine, which segues into “God of Thunder,” you get to see Gene’s bloodied head from every angle imaginable on the octagon light-screen pods as he sings his signature song, and for Thayer’s rocket firing guitar solo, the pods become targets of sorts for the Spaceman. 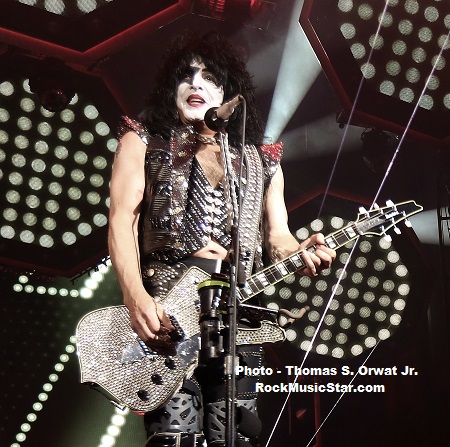 As far as the “EOTR” set list, the set list is always going to be a bone of contention with the fans. With having 20 studio records in their catalog, and performing to a mix of casual fans and diehards, you just can’t please everybody. But the crowd at Darien Lake last Friday seemed to love all 20 songs they played that night, as they played songs from 13 of the 20 albums is their discography. 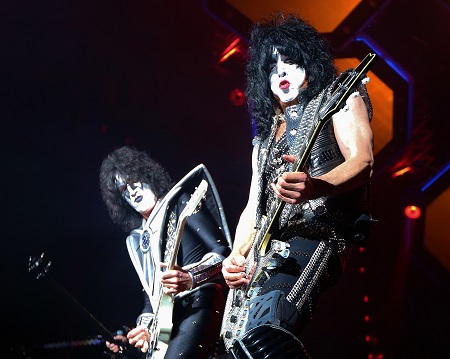 KISS performed every hit they ever had (with the exception of “Forever”) and for their biggest hit, “Beth,” the band did a pseudo recreation of something they did on the 1976 Paul Lynde Halloween Special, and had drummer Eric Singer sing “Beth” (center stage) from behind a piano, which was definitely one of the highlights of the night. While on the Paul Lynde show, former drummer Peter Criss simply pretended to play piano, Eric was shown how to play the parts by former KISS keyboardist Derek Sherinian, as he sang the song and played the major chords along to the full orchestral recording, just like what you hear on ‘Destroyer.’ 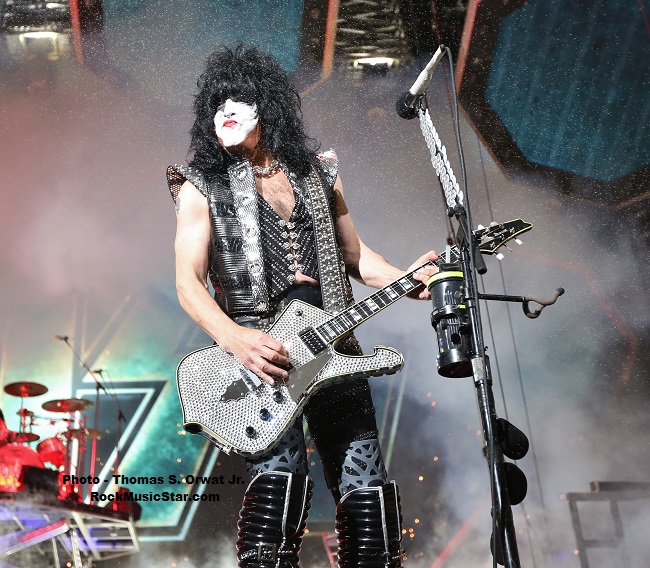 Of course, the very last song you would hear at the very last KISS concert is the fitting show closer, “Rock and Roll All Nite.” Confetti rained down as Paul Stanley thanked Kiss Army a final time. Thinking about leaving the venue and seeing all of the happy faces, I’m sitting here and trying to think of one negative thing to say about the show, so I don’t come across as just some biased “fan boi,” and I can’t think of anything, other than it may be the last time that I ever see KISS live in concert. Feeling the gravity of this being “THE END” to a certain extent, with all of my years of fandom, I feel like they are now all encapsulated inside of me. And, I hope in some way, I can continue to share with other people, other KISS fans, in one way or the other, the joy that KISS has brought to me. People always search to find things that make them happy, I was very lucky to find something at an early age, that stuck with me for most of my life and has continued to bring me happiness for years and years. Whatever you’re searching for, I hope you find it, I’m glad I found my KISS. 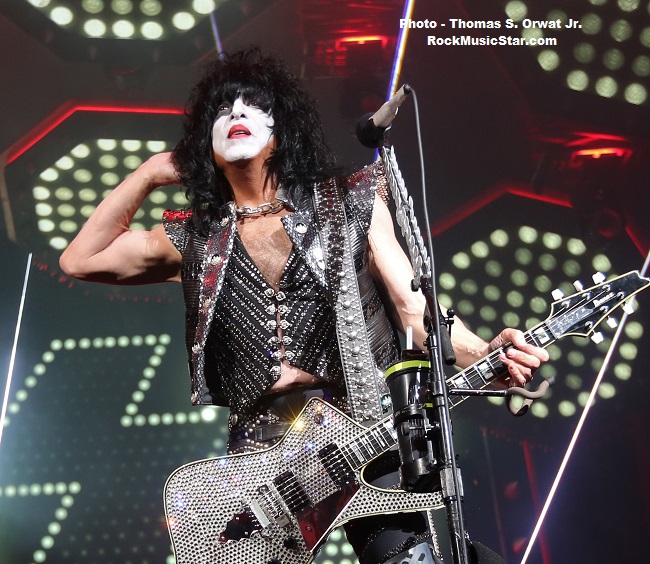