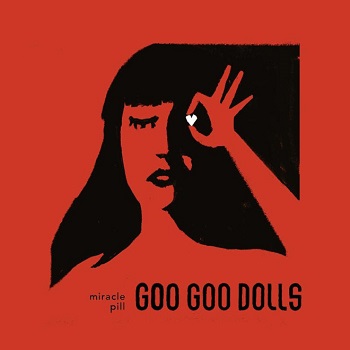 The multi-platinum, chart topping kings of Buffalo, NY, the Goo Goo Dolls released their twelfth studio album, ‘Miracle Pill,’ on Friday the 13th, under a full moon, apropos because this record is scary…scary good. ‘Miracle Pill’ is a well produced, cohesive 11 track release has the dynamic duo of John Rzeznik and Robby Takac boldly paving a new musical path with a collections of songs that are musically innovative, lyrically profound and commercially viable.

Just like on the last two studio releases from the Goo Goo Dolls, main songwriter John Rzeznik collaborated with some of the most well established, prolific and sought songwriters in music today. Sam Hollander, Derek Fuhrmann and Drew Pearson all have credits on this record. Rzeznik, who is regarded as an incredibly skilled and clever, cerebral songwriter responsible for 15 chart topping singles himself, looks at collaborating as a means to better his own craft and to keep it fresh.

The album, ‘Miracle Pill,’ could certainly be looked at as a loosely based concept record which centers on Rzeznik’s personal relationships, coupled with his disillusion with society’s reliance on social media and the detrimental effects caused by the lack of real human connection/interaction and the emotional and physical isolation resulting in the disconnect that ultimately makes us all very vulnerable. Rzeznik effectively captures this mindset on the first two tracks, the introspective “Indestructible,” and “Fearless.” Both songs radiate with their music dynamics and memorable chorus.

The first single- the brilliantly catchy, hooked-filled title track “Miracle Pill,” dominated radio playlists when it was released on June 21, 2019. It’s memorable and unique chorus instantly hooks you in.

“Money, Fame & Fortune” is a masterfully crafted, 80’s new wave synth-infused track that has all of the elements of a hit single with a great hook and instantly memorable chorus. This track features vocalist Valerie Broussard singing along with Rzeznik.

Another extremely impressive track is the enriching, emotionally charged, “Autumn Leaves.”  Rzeznik’s vocals are intense and passionate.  The haunting organ part was recorded live at the Orpheum theater in Los Angeles. This track will certainly be a fan favorite and a highlight of future live performances.

Bassist Robby Takac shines on the two tracks that he sings lead vocals on, “Step in Line” and “Life’s a Message.” He really steps it up on these two very melodic songs. Like on all Goo Goo Dolls records, his raspy voice certainly adds a fresh and an unique dimension and contrast to Rzeznik’s velvety smooth voice.

The closing track “Think It Over” is perhaps the most reminiscent of some of the band’s earlier material. The simplistic piano intro accompanied by cello segues into a powerful guitar driven fused chorus. Rzeznik’s deeply intense lyrics, coupled with the effective use of female gospel background singers, makes this fresh and vibrant song a real gem.

The Goo Goo Dolls deliver again in a big way with ‘Miracle Pill.’ They continue to evolve, mature and remain relevant with each release, which is something that not many, if any, artists can claim anymore.  While ‘Miracle Pill’ may not have huge hits such as “Iris,” or “Name,” it will still be more than satisfying to any long time fan of the band and surely end up adding a few more smiling faces to the growing Goo Goo Dolls nation.

For more on the Goo Goo Dolls, please visit www.googoodolls.com and www.absolutegoo.com