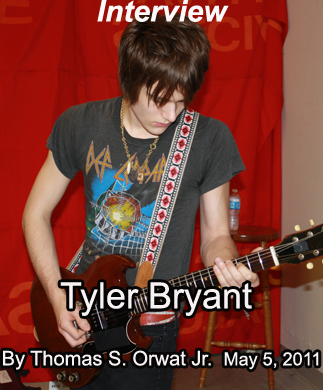 By Thomas S. Orwat Jr.
At only 20 years of age, Texas born guitarist/singer/songwriter Tyler Bryant has already achieved much more than many musicians have accomplished in their lifetimes.  Tyler started playing guitar at the age of six, and quickly mastered the instrument.  At the age of 13, he started performing and writing songs.  At age 15, he was the winner of the prestigious Robert Johnson Gibson New Generation Award, for upcoming, young guitar players.  It was at this time, that he caught the eye of acclaimed rock photographer, Robert M. Knight.  Soon after seeing the amazing amount of talent that Tyler had, Knight took him under his wing, and included Tyler in his documentary entitled, “Rock Prophecies.”  From there, Tyler was thrown into the spotlight, and received accolades from some of the greatest guitar players on the face of the earth.

Fresh off an extremely successful and acclaimed tour with Jeff Beck, Tyler is now gearing up for the next phase of his career, which will consists of a new CD and a follow up summer tour.

What follows is an exclusive interview with this generation’s new guitar god, Tyler Bryant.  In this exclusive RockMusicStar interview, Tyler discusses his tour with Jeff Beck, living on the road, the “Rock Prophecies” movie, and much more.

RMS : Tyler, you just finished a tour, opening for the great Jeff Beck. You are only twenty years old, and you’re opening for the world’s greatest guitar player, and you’re doing it solo/acoustic. I really can’t think of a more intimidating situation.

RMS : Well, you certainly did it well. Why didn’t you bring your entire band? Were you offered that opportunity?

TB: Well, I think because it was easier for them to just have one person – as an acoustic opener. That’s usually the way they do it anyways. It was sort of, “You can come out and do an acoustic set, or we will find someone else who will.” So, I wasn’t really offered the opportunity to bring my band, which is totally fine with me. I would love to have my band here, but this was a great opportunity to try something new, and push myself a little bit. I’ve never been forced to try to win over a crowd, completely, by myself. With a full band, you have guys on both sides of you ,and they can help you work the crowd, and you can build things up a little bit bigger.

RMS : I think it also puts you in a different light as well. When you perform solo acoustic, more emphasis is put on the songs, as opposed to your guitar playing. You are almost looked at as a ‘singer/songwriter.’

TB: Yeah, totally. And I kind of like that, because I spend so much time writing songs. And for me, all songs start on my acoustic guitar. So, it’s a great opportunity for me to get out and play my songs in their original form. It feels like a real rootsy, cool thing to do. I’m really having fun with it.

RMS : Playing the guitar came very naturally for you. Do you find songwriting a little more challenging?

TB: Well, I never really thought about it that way. I just started writing songs. And you have to write a lot of bad ones before you can get out the good ones. Writing is really just about getting the emotion across. Some times, I would write something and think it’s great, but then I would listen back the next day, and not be so impressed with it. I think that it’s a lot like playing guitar. You play something over and over, and eventually you get good at it. I would work on songs, and eventually they would start coming together.

RMS: You were one of the featured artists on the Robert M. Knight documentary entitled “Rock Prophecies.” How much of an impact did that movie have on your career?

TB: It was great. A lot of people that never heard of me, heard of me for the first time in that movie. So, also for me, it’s a really cool snapshot of where I started. It has opened a lot of doors for me.

RMS : Did you notice an increased interest when the movie was added on Netflix?

TB: Yeah, we had a lot of action on our facebook page. People were saying how great the documentary was. The whole thing has been very cool. We also got a lot of traction for PBS as well, because they are playing it too.

RMS : Has Robert M. Knight been to any of the Jeff Beck shows in which you were opening?

RMS : Was he instrumental in helping you get the opening gig for Jeff Beck?

TB: No, not really. It was my booking agent. I sent them an e-mail asking them for a ticket to see a Jeff Beck concert. And I also said that no one was opening, and I would love to open the show. So, he sent Jeff a video, and they wrote back and offered me the entire tour.

RMS : Wow! You also plan on releasing a new CD soon. Do you have a release as of yet?

TB: No definite release date. But, we are planning on turning it around really quickly. We are starting June 1st (recording) and we start touring in July. I don’t feel that we have to spend a lot of time in the studio. I also want to do it the old school way, where everyone is in the room together. But, we plan on having it out in July for the tour.

RMS : Is there a record label involved or do you plan on releasing it independently?

TB : As of now, we plan on releasing it independently. But there are some deals in the works. But, we will see what happens. However, either way, I’m releasing it. If the label is on board with that, then fine. But, we need to get back out on the road. We will be hitting a lot of the same cities that I played on the Jeff Beck tour. I think that it’s very important to capitalize on that.

RMS : Yeah, that is a smart move. Thousands of people watched you perform on that tour and I’m sure that they would love to see you again, but this time seeing you at your best – with your band. A lot of artists won’t play the same cities so soon after, because they don’t want to over expose themselves. But, in your situation, I think that it’s a great game plan.  I’m really looking forward to when you come back here to Buffalo, NY on July 16 and play the Mohawk.

TB: Yeah, people want content. If they like your music, they are going to come and see your shows. I just want to give people something to listen to.

RMS: It this upcoming tour going to be a headlining tour, or will you be opening for someone else?

TB: It will be a mixture of both. We have been talking to a few artists about opening for them. There is also some talk about festivals and stuff. It’s really a big whirlwind right now. Everything is going so fast. We are taking it as it comes, you know.

RMS : So, is being a Rockstar everything that you thought it would be?

TB: (laughs) I never really sat around and thought about being a rockstar. I just always want to make music. I just never realized how much driving you have to do. The first half of the Jeff Beck tour, I had to drive behind their tour bus in my van. So we would have anything from a six to fourteen hour drive. Then have to get out, and play the show and then drive again, sleeping at a truck stop. But the last half of the tour, I was travelling with Jeff and his band, in the bus, and had a nice hotel room.

RMS : Wow, you were doing it old school blues style.

TB: That’s what you have to do sometimes. It’s a lot of work at the start, and a lot of people don’t understand that. They think that it’s all glamour. We’ve been on some pretty big tours. We’ve played with Aerosmith, Pat Benatar , REO Speedwagon, a ton of bands. People assume that if you are playing a big show, that it’s all glamourise. It’s actually more work, because those guys get to sleep after a show, and you’re driving your van, following their bus, while they are sleeping. It’s what you have to do, and it’s what separates the men from the boys.