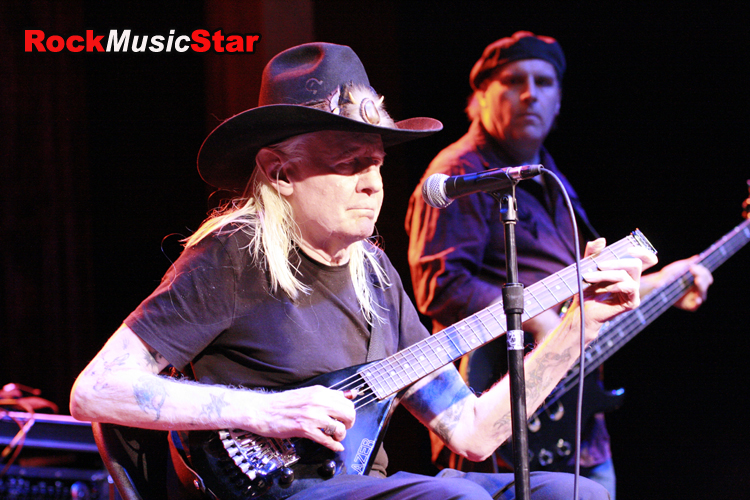 Niagara Falls, NY – Back in the day, Johnny Winter was the most feared, bad ass, guitarist on the planet.  The Texas born albino, quickly mastered the blues at an early age.  He then developed a unique and blazing’ electrifying style that resulted in him signing one of the most lucrative record contracts of the time.  He was praised by Rolling Stone magazine, and was regarded as the American version of Eric Clapton.

However, over his 40 year plus career, Winter suffered a series of mishaps that included anti-depressants and heroin addiction, poor career decisions and a manager that allegedly embezzled millions from him.  All this adversity took a toll on Winter’s health.  At his worst, Winter withered down to a mere 90lbs, and was too frail to perform.  But in 2004, Winter met guitarist, Paul Nelson, and liked his style so much, that he asked him to join his band.  Then in 2005, Winter fired his long time, troubled manager and Nelson took over.  Since then, Nelson has played an intricate role in helping Winter regain his career, along with getting him healthy.

That brings us to last Saturday night, in which Winter returned to Niagara Falls, NY and performed a solid 90 minute set in front of 300 plus adoring fans.  Winter proved right from the start, that even with all the adversity he has faced, with his health issues and the fact that he is legally blind; he can still put on a great show.  And he made it very clear from the first note, that he is still a force to be reckoned with on the guitar.

The show opened with Winter’s amazing band, which consists of Paul Nelson-guitar, Scott Spray-bass and Vito Liuzzi-drums, taking the stage and performing a cool, rockin’ blues intro.  Winter soon walked out from stage right and took a seat in the center of the stage, as all eyes were upon him.  After one of his techs plugged in his signature Erlewine Lazer guitar, Winter and band ripped into the Freddie King classic, “Hideaway.”  It was at this time that the crowd realized that Winter’s guitar and vocals were in no way compromised.

It was very intriguing just watching Winter’s perform.  His guitar style is unique to that of most rock/blues guitarist, in the fact that he doesn’t just use a traditional guitar pick, but plays with a thumb pick for the low E, A and D strings, and figure picks the G, B and E.  He also used a glass slide, which he is notorious for.  However, he didn’t use it until later in the performance.

Winter played a well balanced set that included two new tracks, “Got My Mojo Working” and “Dust My Broom”from his upcoming CD entitled “Roots” (to be released on Sept 27th on Megaforce Records).   He also played “Lone Wolf” for his last studio and Grammy-nominated release (2004), “I’m a Bluesman.”  This track then segued into a crowd pleasing and jammin’ version of the Rolling Stones hit, “Gimme Shelter.”  The audience rose to their feet and gave Winter the first of many standing ovations after this song.  But the biggest ovation came when Winter’s rose to his feet and performed while standing (for the entire song) another Rolling Stones classic, “It’s All over Now.”

Other highlights of the show included his obligatory classics hits “Johnny B. Goode,” and “Boney Moroney.” Another significant and notable moment was when Winter strapped on his vintage Gibson Firebird guitar and grabbed his glass slide for the last two songs of the evening, “Dust My Broom,” and the Bob Dylan ground breaking classic “Highway 61 Revisited.”

This was a fabulous performance by a true and real music legend.  Many artists would not, and could not perform if they were faced with the same heath problems as Winter.  Some may even think that’s a bit cruel to make him perform in his condition.  But let me tell you one thing, Johnny Winter was born to perform.  And I truly believe that the worst thing for him, would be to quit performing.  You couldn’t help to sense the pure joy that he had from all of the unconditional love and heartfelt allocates that he received from the audience during his performance, and then later at his meet and greet. He really appreciates his fans as much as they appreciate him.  As music fans we are very fortunate to still have the opportunity to watch him perform.  So, I beg you; please catch one of his performances.  Johnny can still play the guitar, just like ringing a bell.

For more on Johnny Winter, check out www.johnnywinter.net