Niagara Falls, ONT – Over the past few summers, classic rock fans in WNY have been spoiled with dozens of concerts from some of the most iconic bands in rock history.  Last Thursday, the “Rock n’ Roll Hall of Fame” Texas trio, ZZ Top, returned to the area again, for the third time in four years.  The band, which consists  of rock royalty, Billy Gibbons- guitar/vocals, Dusty Hill- bass/vocals and Frank Beard- drums, have been going strong since 1969.

This performance was rather unique, in that it took place in the intimate confines of the acoustically brilliant Avalon Ballroom Theater, in front of a sold out crowd of 1500.  These three amigos really seemed to flourish in the laid-back casino environment.  The fans in attendance were also a little more comfortable here, in an air-conditioned venue, as opposed to the previous ZZ Top area shows that took place outdoors, in front of ten thousand plus. 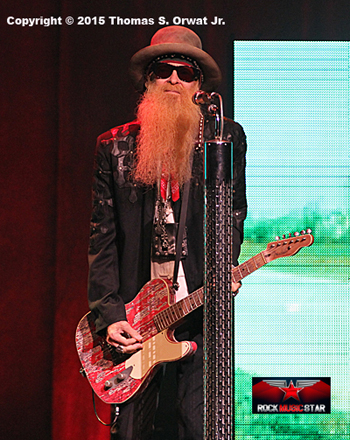 ZZ Top started the evening with their 1983 Top 20 hit, “Got Me Under Pressure.”   What followed was a 70-minute, hit filled, rock n’ blues performance like no other band on the face of the earth could provide.  It was blissfully magical.  These three timeless rockers can still make quite the racket.  And, while Billy Gibbons seems like a really nice guy, on guitar, he is the meanest, baddest mutha f’er ever to hit the stage.

In the past, ZZ Top had some of the most elaborate stage shows.  However, on this night, their stage set up was rather stripped down, consisting of just two video screens, the band’s gear, and, of course, the trademark beards of Gibbons and Hill.  But, on this evening, the emphasis was all about the music.

Before blasting into one of the fans’ favorite tracks, “I’m Bad, I’m Nationwide,” Gibbons joyfully joked, “We’ve been together since 1969, playing the same three chords, and now we’ve finally made it to playing the casino!”

One of the highlights of the show was the performance of the Hendrix classic, “Foxy Lady.”  As many fans of the band know, Jimi Hendrix was a huge supporter of Billy Gibbons; he even mentioned on several talk shows in the late 60’s and early 70’s that he felt that Billy was going to be the next guitar superstar.  If Hendrix was watching for the heavens, he most certainly would of been proud of Gibbons masterful six string performance on this evening.

Before performing the Robert Petway cover, “Catfish Blues,” Gibbons asked the audience, “How about some low down blues?”  Gibbons, Hill, and Beard took this blues classic to another level.  Gibbons’ extended solo received a loud cheer from the delighted audience.  That guitar tone of Gibbons is truly a monster of its own; it’s so satisfyingly nasty.  Gibbons segued into the next song stating, “That song makes me cry, so I better get my ‘Cheap Sun Glasses.’”

The crowd, which, at casino shows, is usually rather sedated, was now awake and really getting into this performance, as most sang along to the chorus of, “Cheap Sun Glasses.”  Right before the band started, “Sharp Dressed Man,” many left their seats, and ran up to the front of the stage, much to the surprise and delight of the band.  This was no longer a concert, but a party with one of the greatest bands of all time as the house band.

The evening ended in a near music frenzy, with an encore of two of the band’s signature songs: “La Grange,” and, “Tush.”  Again, the guitar mastery of the living guitar legend, Gibbons, was on full display.   He could play just one note and make it sound so cool.

The crowd gave the band a standing ovation as they left the stage.   ZZ Top provided us with another amazing concert to remember, and made the summer of 2015 even better for the lucky 1500 in attendance.  The Fallsview Casino was the only place to be on this evening! 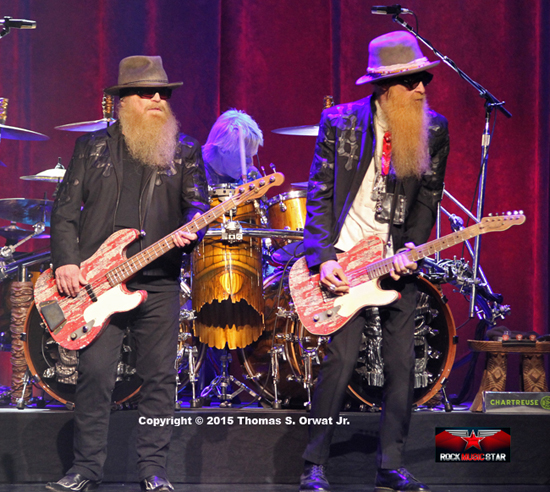 Thank you to Jennifer Murphy for providing RMS with the press credentials to cover this event.  For upcoming events, at the beautiful Fallsview Casino Niagara Falls, ONT., click here.  Also, thank you to Dana Kaiser!