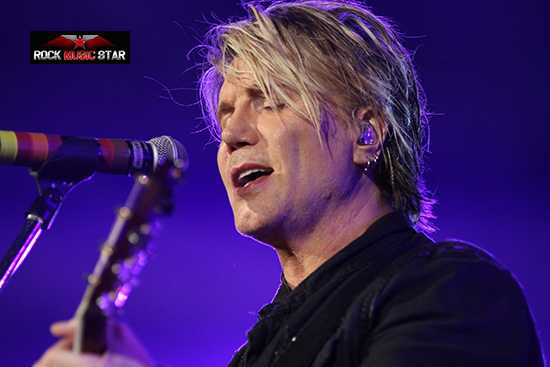 For over two decades, the Goo Goo Dolls have taken their hometown of Buffalo, NY, on the most incredible journey.  The dynamic duo of John Rzeznik and Robby Takac have made Buffalo proud with their incredible record-setting string of chart-topping songs and memorable concert performances.  The Goo Goo Dolls are arguably just as important to their hometown, as the Buffalo major league sports teams: the Bills and Sabres.  On last Saturday evening, the band gave us another concert experience to never forget.  The Goo Goo Dolls, which are currently touring in support of their dynamic new release, ‘Boxes,’ played an inspired and passionate set in front of 12,000 admiring fans.  The audience varied in ages, from the long-time fan of 30 years, to their children seeing the band for the first time.  This is something they take very seriously, with Rzeznik explaining during the band’s 22-song performance, that he is always “nervous” about playing in front of his hometown audience. 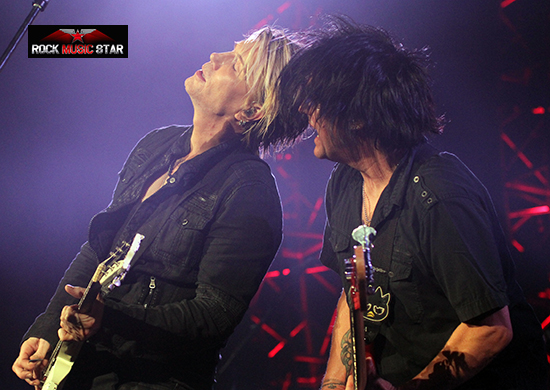 The evening’s performance started promptly at 9:15 pm; the band kicked into their recent single, “Over and Over.”  It was evident that the Goos had their game faces for this show.  After Rzeznik sang the first couple lines, he motioned to the sound guy on the side of the stage to turn up his vocals. After that request was ignored, he looked over with an intense – if looks could kill – death stare and yelled, “NOW!”  Needless to say, the vocal volume level wasn’t an issue after that.

The one thing with Rzeznik is that you never know what you’re going to get.  During past performances, he has been very loquacious. However, on this evening, Rzeznik – who was certainly genuine when he addressed the crowd a few times – was much more reserved.  His concentration and focus was clearly more on the performance than the stage banter.

Before the band’s first number one hit, “Name,” Rzeznik briefly explained, “The day I wrote this song, mine and Robby’s life changed forever.”  He added, “This (Buffalo, NY) was the first place that gave a shit about us, so this song is for you.”  The crowd cheered in approval, and a passionate sing-a-long followed.

Bassist Robby Takac took over lead vocals for four songs during the evening, the highlight being the Prince cover song, “Never Take the Place of Your Man,” from the band’s 1990 release, ‘Hold Me Up.’  This song was originally sung by the band’s late friend, Lance Diamond.  This was Takac’s high energy tribute to Diamond, and also Prince, as well.

The Goos also played quite a few songs from their new release, ‘Boxes,’ including the previously mentioned opener, “Over and Over,” their first single off the release, “So Alive,” “Souls in the Machine,” “The Pin,” and the encore, “Long Way Home.”  All of these songs went over very well with the crowd.

What makes this band so special and unique, is the fact that they have so many chart-topping hits.  You can’t go to a Goo Goo Dolls concert without having a great time.  Just like it’s next to impossible to go a day without hearing one of their songs on either the radio, TV, or even walking through a grocery store.  The list is endless, and they played almost all of them on this evening; “Iris,” “Better Days,” Broadway.”  Each one had the crowd singing along, smiling and having an awesome time on one of the last remaining hot summer nights.

The Goo Goo Dolls show no signs of slowing down.  Their current release has at least five singles on it. This is a band that gets better with each recording. They will be here for many years, with more great concerts and hits to follow.  There is much more road to cover on this incredible musical journey, of a city and a band that have a mutual love of each other.

For more on the Goo Goo Dolls, please visit, www.googoodolls.com