Poison and Cheap Trick battle it out, and the audience goes home the winner.

Darien Lake, NY – “The Nothin’ But a Good Time Tour 2018,” featuring multi-platinum selling, glam-metal band Poison, along with Hall of Fame inducted classic rockers Cheap Trick, and openers Pop Evil, live up to its promise and certainly provided a “good time” for the 5000 plus in attendance on this perfect summer evening.

While, at first, one may think that both Cheap Trick and Poison appeal to pretty much the same audience, but after witnessing this show, it become very obvious that there is quite a surprising contrast between the two superstar bands.

Poison, who have been at the mercy of singer/reality TV star Bret Michaels schedule over the last few years, are on their first major headling tour since 2012. Their high energy,  choreographed and polished performance had them blasting out the hits, one after another.

Michaels is the ultimate showman: he knows, even if a bit predictable,  what the audience wants, and he delivers. Along with original band mates, CC DeVille- guitar, Rikki Rockett- drums and Bobby Dall-bass, Poison is on stage to entertain, not only to just their dedicated fans, but to anyone in the building.

During the show, Poison brought up a group of Military personal and first responders on stage, in their appreciation of their amazing service and dedication.  It was a great gesture of the band, and the crowd ate it up with cheers of U.S.A.!

Although, during Poison’s set, they did lose a bit of momentum with unnecessary solo spots for Deville, Rockett and Dall, but they were always able to bounce back and get back on track. The band’s performance of their iconic hit, “Every Rose Has its Thorn,” had the audience back on their feet, singing back every word. 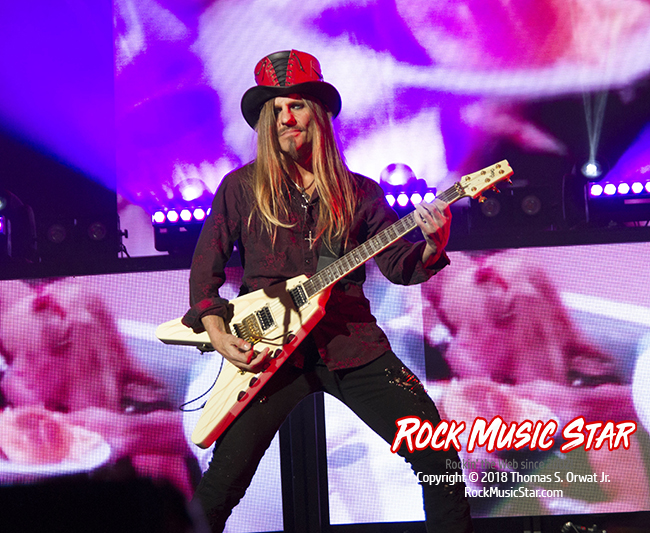 The band finished their set with an all out, and explosive cover of the KISS classic, “Rock and Roll All Nite.” Poison certainly proved on this night that they are one of the most entertaining bands around and more than worthy of headlining the big sheds once again. 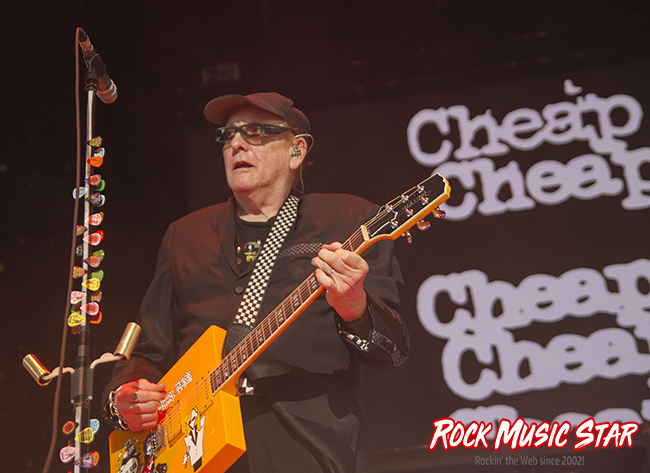 Unlike Poison, Cheap Trick have been mixing up their setlist pretty much every night on this tour. Although the classics still remain, on this evening the band appeased their diehards with “He’s a Whore,” from their 1977 debut album and “Waitin’ on the Man,” which featured Petersson on lead vocals.

Cheap Trick is certainly a band that appeals to the more serious connoisseurs of classic rock. They sounded great, especially Zander’s vocals, on this evening and really bring a new shine to some of their old catalog live. Unlike some of their peers, Cheap Trick can still write a great pop tune, as evident with their recent, infectious single, “The Summer Looks Good on You.”

Cheap Trick ended their set with an intense rendition of “Surrender,” with the help of Pop Evil guitarist, Dave Grahs and then their closer, “Goodnight.” This was a great performance by an incredible yet still underrated band. They could very well be just as popular now as they were back in the high point of their career. Their fans certainly adore them and appreciate them now, more than ever. Perhaps, LiveNation will take a chance and have Cheap Trick headlining their very own tour next summer.

This double billing proved to be an effective mix, even with both Poison and Cheap Trick  having their own dedicated and opinionated fanbases present. Yes, the Cheap Trick fans think their band should have headlined, and the Poison fans wondered how the old guys in Cheap Trick could still rock at their age. But, both bands put on a great show. And, in the end, even some of the snobby, old school Cheap Trick fans had smiles on their faces while rocking along with Poison, as they played “Nothin’ but a Good Time.”

Look What the Cat Dragged In
I Want Action
Ride the Wind
Talk Dirty to Me
Something to Believe In
Your Mama Don’t Dance
Guitar Solo
Fallen Angel
Unskinny Bop
Drum Solo
Bass Solo
Every Rose Has Its Thorn
Nothin’ but a Good Time
Encore:
Rock and Roll All Nite

A big thank you to Amanda Cagan for providing us with press credentials to cover this event.

For more on Cheap Trick, www.cheaptrick.com