Darien, NY- The Lynyrd Skynyrd/Bad Company co-headlining tour touched down in Darien, NY last Sunday evening. Both legendary bands are celebrating their 40th anniversaries. While they drastically differ, stylistically: Lynyrd Skynyrd are the originators of American Southern rock, and Bad Company was 2nd to Led Zeppelin as England’s most popular blues rock export, the 9,000 people of all ages in attendance didn’t take sides; they showed equal appreciation for both bands.

During this tour, Lynyrd Skynyrd and Bad Company are alternating the closing slots for each show. On this particular evening, it was Lynyrd Skynyrd, followed by Bad Company. This worked out well, because this amphitheater is notorious for the long traffic jams after the shows. This forces many people to leave before the final song- and nobody wants to miss Lynyrd Skynyrd’s final song.

Lynyrd Skynyrd took to the stage at exactly 7:50pm, and played an entertaining and hit-filled 80 minute set. Although guitarist, Gary Rossington, is the only member of the classic line-up of Lynyrd Skynyrd still in the band, the current members did an outstanding job in playing the classic hits. Most of the current members of the line-up have been in the band longer than the original members, anyways. Vocalist, Johnny Van Zant, has been in the band since 1989, and has done an amazing job in replacing his brother, Ronnie, who died in the tragic plane crash on October 20, 1977. Van Zant, along with guitarist, Rickie Medlocke, and Rossington have been instrumental in keeping the Skynyrd spirit and legacy alive and intact. 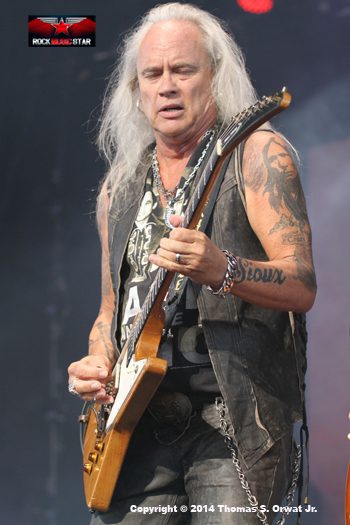 Highlights of Lynyrd Skynyrd’s set included Medlocke’s high-energy guitar solos. Although he is 64 years of age, he performs as if he is 25. With his skinny jeans and ripped Johnny Cash shirt, Medlocke looks as if he has discovered the fountain of youth. He was constantly smiling and playing around with the other members of the band. During the performance of “Saturday Night Special,” Van Zant gestured a gun with his thumb and index finger. Medlocke quickly responded by shooting an imaginary bow and arrow back at Van Zant.

Mid-set, Medlocke switched from his trademark, vintage Gibson Explorer, to a mandolin for the fan favorite track, “Mississippi Kid.”

The band’s newest member, ex-Black Crowes bassist, Johnny Colt, not only did a great job playing the riffs of late great, “Mad Hatter,” Leon Wilkeson, but also displayed his own zany and interesting hat collection in tribute to Wilkeson.

But, without any doubt, the biggest highlight, of course, was the band’s performance of their career-breaking hit, “Freebird.” During this epic song, the names of all of the deceased members of the band flashed on the video screen backdrop. One has to wonder if Lynyrd Skynyrd was cursed at some point; the amount of tragedy and death that this band has faced over the years is unheard of. The triple guitar army of Skynyrd just slayed this classic rock anthem.

Although, most of the current version of Skynyrd has performed countless shows, they still play with a great amount of passion and are entertaining. They should be praised for continuing, and bringing this great music to the lovers of classic Southern rock. No one does that better, whether it is the classic, or the current line-up. Skynyrd still rules!

Bad Company took to the stage a bit after 9:30pm, and played a satisfying, yet predictable set, consisting mostly of their popular songs from their classic first five releases. Impressively, the band has three of their four original members still in the band: Paul Rogers- vocals, Mick Ralphs- guitar, and Simon Kirke- drums. Original bass player, Boz Burrell, died in 2006 at the age of 60. Replacing Burrell on bass was Todd Ronning. Also rounding out the line-up is touring guitarist, Howard Lesse, (formerly) one of the classic line-up members of Heart. 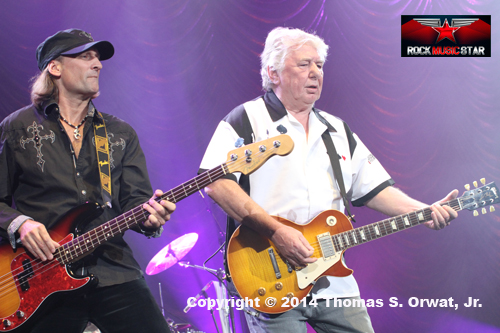 What was immediately impressive about Bad Company was how amazing they sounded. The 64-year-old vocalist, Paul Rogers, is absolutely incredible. Guitarist, Mick Ralphs, may look like a grandpa, but he has great guitar skills, nailing every solo and riff throughout the evening.

Mid-way through the set, the three original members took center stage for an acoustic rendition of “Seagul,” from their 1974 self-titled, debut release. Drummer, Simon Kirke, showed that he is more than just a drummer, with his very impressive guitar work on this track.

Bad Company managed to keep all of the fans up on their feet and rocking out, just like they did back in 1974. This was a true testimony to the power of their great songs, and also to the fact that they still do a fantastic job performing them, as well.

The show ended with two of their most popular songs, “Bad Company,” and “Rock Steady.” At this point, you had to wonder if this would be the last opportunity to witness this amazing band at this level. Unfortunately, time does not stop for anyone, even rock n’ roll.