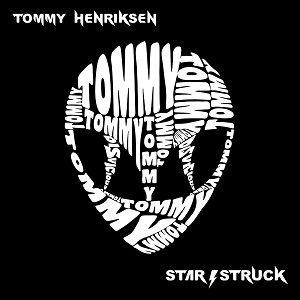 Coming out this week (March 17, 2017) is Producer/Singer-Songwriter/Guitarist Tommy Henriksen’s 5th solo CD, entitled, ‘Starstruck.’ Henriksen’s latest solo venture is the follow up to his 2014, ‘Tommy, Tommy, Tommy’ CD. While ‘Starstruck’ is yet another display of Henriksen’s uncanny knack of wearing his musical influences on his sleeve, this time around, Tommy delivered a more guitar-oriented, straight ahead rock record, as opposed to the more eclectic pop-punk offerings found on ‘Tommy, Tommy, Tommy.’ As far influences go, this new record somewhat moves away from the Iggy Pop/Lou Reed type stuff he’s done before and focuses more on other aspects of his musical makeup, as ‘Starstruck’ shows Henriksen really channeling his other music heroes, like Alice Cooper and Bruce Springsteen.

On the recording of ‘Starstruck,’ Tommy played everything and sang all of the vocals, in addition to engineering, mixing, and producing all of it. Written and recorded on the road in various hotel rooms throughout 2016, the antithesis for ‘Starstruck’ was actually the opening instrumental, “A Cold Open,” an Ace Frehley inspired mini-opus, complete with trademark ‘Space Ace’ vibrato bends and toggle switch mayhem. As Henriksen recalled, “‘Starstruck’ started out with this guitar solo/Ace thing that was fun for me…so people know I can solo! That my musical capacity is not just limited playing rhythm guitar behind Nita Strauss and Ryan Roxie (in Alice Cooper’s band).”

Once people hear ‘Starstruck,’ there will be no question whether or not Tommy Henriksen can ‘rip it out’ on lead guitar, as he dazzles the 10 song disc with his six-string dexterity throughout. Aside from the opening track, there are several other great moments on the record where Henriksen is clearly paying homage to Frehley. Songs like “Goldmine” and “New York Baby” sound like Ace in his prime, and even the bridge in the title track sounds just like the lead build up from “Rocket Ride.”

As far as the song writing itself goes, it’s clear from listening to ‘Starstruck’ just how involved Tommy Henriksen is in the modern Alice Cooper sound. Songs like “Starstruck,” “Goldmine” and “Jerks and Dopes” – musically, lyrically and vocally sound like they could easily fit on the next Cooper disc. But let me be clear, Tommy is a musician who stands on his own merit, and once you become familiar with his style, you can hear ‘Starstruck’ is unmistakably “Tommy Henriksen,” and that’s a damn good thing!!